In the Eye of the Beholder... 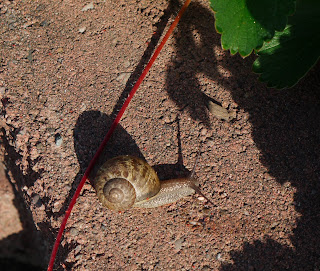 This snail has spied the strawberry plants. 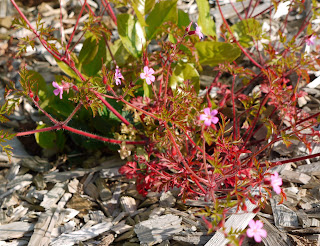 Hank removed his dirty shoes at the door after a long afternoon of yard work. “I wonder why God thought we needed so many weeds,” he said, only half joking.

“Did you ever stop to think how ungreen this “Great Northwet” would be without weeds?” I asked. We laughed at the image of our lovely part of the country being muddy and barren except where people place their favored plants.

Even though we’ve removed most of our lawn and planted wild shrubs and grasses native to Puget Sound, we still cultivate flowers of every kind in pots and in flower beds. Our tiny backyard is mostly devoted to edibles: herbs, a dwarf apple tree, strawberries and raspberries, rhubarb, even Hank’s still-under-construction 4’x 8’ raised vegetable bed. Tomatoes and lettuce flourish in pots on the back deck.

We delight in the beauty and variety of all we’ve planted, and so do the aphids and snails. Between other chores today, I’ve sprayed aphids on the rose bushes...again. The snails nibbled the first of the emerging dahlia leaves before I noticed. However, slug bait may give the dahlias a chance to start over and give us late summer color after all.

The black hollyhock, which prefers the gravel at the edge of the driveway, had been doing well, but today I noticed a few shredded leaves and looked closer. Snails!...handsomely marked and nearly as big as ping pong balls...lots of them, which I sent without remorse to snail heaven.

With equal remorselessness, I dug out “weeds.” They are as attractive in their variety and design as anything horticulturists produce but lots harder to kill. The horsetails are tiny, harmless-looking clubs poking out of the ground one day. The next time I look, they are two-foot tall bottlebrushes of chartreuse green, jointed whorls of fronds looking as prehistoric as any plant still found on earth, with a regenerating root that goes deep as the part above ground. A variety of burgundy clover with heart-shaped leaves and tiny yellow flowers grows up through the hens-and-chicks and in the rockery, almost impossible to root out. But it’s beautiful. So are the rosettes of thistle, and the noxious weed, Robert’s geranium, called “Stinky Bob” by some. (See photo above.) It is starred with little lavender-pink blossoms that quickly turn into crane’s bill seed pods. They ripen and pop unnoticed, scattering seeds far and wide to start dozens of progeny. We have dandelions too, of course, and also baby hazelnut trees, planted by squirrels right next to the house.

Whether weeding or fighting insects, there’s something soul-satisfying about working to make things grow. Is it because we’re participating in a small way in Creation? After all, the first job ever given to humankind was to look after a garden. And the second was to “earn your bread by the sweat of your brow,” cultivating the land.

So, I guess we must battle weeds. And pests that don’t know the difference between chosen and unchosen plants. But I still think they’re beautiful. 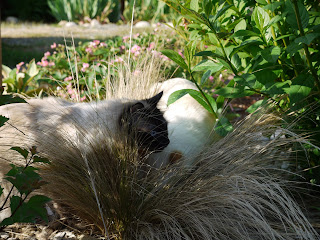