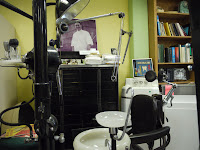 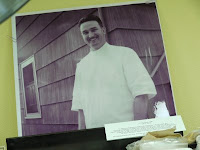 Last year, Hank and I walked with our granddaughters into the Marysville Historical Society’s museum...the first time any of us had been there. Its temporary home is in a former store on 3rd Street and inside is an amazing collection of items showcasing the town’s history.

We squeezed past a carousel of early-day photographs to reach a collection of telephone switchboards. Glancing into a nearly hidden alcove, I was startled to see a familiar face smiling from a life-sized photo on the wall. There stood Dr. H.L. Nelson in his white dentist’s coat, looking just as he’d appeared more than 50 years ago. Time stood still in a moment of déjà vu.

Beneath Dr. Nelson’s picture sat the very same equipment he’d used during those hated but necessary visits to his office. The leather-covered chair was cracked and scuffed with use. Crowded into the alcove were his equipment cupboard, the sink where he’d washed his hands (no latex gloves in those days), and even those sharp and terrifying probes and his drill with the pulleys and cables.

We Rawlins kids grew up in the soft-water country of the Pacific Northwest, before the days of flossing or fluoridated toothpaste. By the time our second set of teeth came in and our parents could afford a family dentist, we had cavities...lots of them.

I remember Dr. Nelson’s name, painted on a framed glass sign, as it hung in the window of his little storefront dentist office on Marysville’s State Street. Behind that window was the tiny reception area. As we sat waiting, we occasionally heard muffled yelps of pain coming from behind a partition. We knew our turn was coming, and our dread grew.

Dr. Nelson’s assistant checked us in at the counter, fastened the paper bibs around our necks, and handed the dentist his tools as he worked.

To his younger customers, Dr. Nelson’s office looked liked a torture chamber. A monstrous chair, covered in shiny leather, had pads to grasp one’s head and hold it in place. Dr. Nelson worked a foot pump to raise that chair so he and his patient were nearly face-to-face. Then he adjusted levers to rock the chair back to a reclining position and proceeded to sort through a collection of frightening-looking implements. Selecting one of them, he would lean across the chest of his victim, tell him or her to “open wide,” and begin to explore the gaping mouth in front of him with that sharp instrument. It was too late for escape! The point of the pick dug at the weak spots in our teeth. Sometimes it even broke through into a spot of decay, and he had to work it free.

Having decided upon his course of action, he’d mutter directions to his nurse. She’d go about her mysterious business while he reached for that overhead drill, all pulleys and cables and a long probe to which he fastened a drill bit. It made a terrible whirring noise. “Open wider,” he said, and pressed that drill into the offending tooth. The grinding, whirring sound increased as the dentist bore down on it. The patient dared not move for fear of causing the drill to slip. Sometimes it did slip, gouging into a tender gum. Sometimes the tooth resisted and Dr. Nelson pressed harder. Then the enamel might suddenly give way, allowing the drill to plunge into the softer part of the tooth. Now our own yelps frightened those in the waiting room.

The dentist’s big hands and his instruments in our mouths stretched our lips to the splitting point. About the time we felt like we might drown in our own saliva, he stopped. The nurse handed us a little paper cup of water. “Rinse your mouth and spit,” she’d command. We leaned over the side of the chair and spit into a miniature round glass sink.

Dr. Nelson mixed some silver-colored metal with a little mortar and pestle and packed it bit by bit into the cavity. He polished the new filling with a different attachment on the overhead drill. When he was satisfied that the filling fit perfectly against the tooth above or below, we rinsed again and made our escape.

Over the years, there were many such appointments for each of us, for Dr. H. L. Nelson practiced dentistry in that same little store front office for 43 years, almost to the day he died in 1990, long after the advent of “painless” dentistry. Though not painless, his dental work lasted for decades and saved us siblings from the all-too-common fate of needing dentures at a young age.

I spent a long time in that alcove, marveling at the memories that battered equipment brought to mind. How odd. When I was eight or ten, that quaint equipment had been state-of-the art. Dr. Nelson had seemed an all-powerful figure not subject to the same frailties as other humans.

Had it all come down to this: an exhibit in a museum? An opportunity for grandparents to say to their grandchildren, “See? It really was this way when I was a child”?

No, it’s more than that. It’s true that the healing arts, like dentistry, must sometimes cause pain to bring eventual good. Dr. Nelson’s story is another opportunity to see that a life spent in service to others is a life well spent. If someone can someday say that about me, I wouldn’t mind ending up in a museum!
Posted by Joan Husby at 4:31 PM