Tale of A Grand Piano 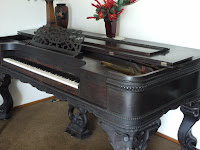 Growing up in the Robe valley back in the 1940s, we five Rawlins kids seldom felt the lack of nearby grandparents.

Instead, we had Verna and Will Blythe, cheerful neighbors who welcomed our frequent visits and invited us to call them “Aunt” and “Uncle.”

Sometimes Aunty Verna let us plink out tunes on the elegant, black piano that stood in a corner of their parlor. I never heard her play it so I assumed their daughter Helen had made music on it when she still lived at home. That piano seemed enormous. I often wondered about its history.

Helen had two cousins, Bob and Norman, who lived across the hay field. All three cousins married and raised families. I left Robe valley, never having visited in their homes. Norman and Lois Blythe moved to Granite Falls, where Norman died. Some years later, I went to visit Lois. There, filling much of her living room, was Aunty Verna’s ornately carved piano I’d last seen nearly fifty years earlier.

Lois told me its story. Her father-in-law, Fred Blythe, had two brothers. Their father died young and the oldest boy, our own “Uncle” Will, left school at age twelve to support his mom and siblings. In 1902, when Will was sixteen, he, his mother, ten-year-old Fred, and seven-year-old Rod moved by train from Michigan to Seattle. The piano had been a sixteenth birthday gift to his mother, Ella, in 1873. It also came on the train.

They removed the legs for transport by taking out the big wooden screws that fastened them to the body. The solid brass sounding board and the painted, hand-carved rosewood of the piano’s main section weighed close to 2000 pounds. Six men could barely carry it.

Lois knew that the train brought the piano as far as Hartford on the tracks of the old Monte Cristo-Everett railroad. From there it was hauled over the primitive road to Robe valley. Young Will built a home for the family, with the help of neighbors. The youngest son, Rod, learned to play the piano, but a few years later he went off to fight in WWI and died overseas. 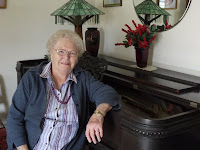 ago, when the lyre that holds the
pedals needed tightening, her son took it apart. He found a hand-carved space in the block beneath the lyre, and in it a key that locks the cover. Perhaps it was hidden there for safe-keeping when the piano arrived at its new home in the valley back in 1902 or 1903. 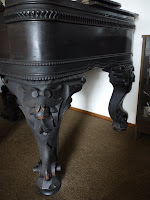 Attention to detail
was a hallmark of
the period. 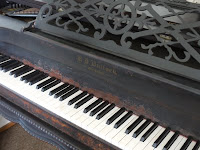 The name in scrollwork on the front of the piano
reads RD Bullock, Jackson. The original rosewood
shows through the old paint.

The secret box is beneath the lyre.
Posted by Joan Husby at 4:18 PM