In my last post, my Minnesota “sister,” Donna, told a touching tale of a depression days Christmas and the refurbished doll that became her most prized possession.

I, too, had a baby doll that I loved with all my heart. I’d named her Virginia, the most elegant name I knew. Virginia’s molded composition head, legs and arms were attached to a cuddly cloth body. Her blue eyes opened and closed. In my first memories of her, her eyelashes were already worn away, like Donna’s doll. When I tipped her forward, she too cried “Ma--ma.”

By my fifth birthday, her dress was faded and torn, probably because it was also used to dress my unwilling kitty. Aunt Mary, still in her teens, sewed Virginia a whole new wardrobe as my birthday gift that year. I especially loved the ruffled dotted Swiss dress with matching bonnet.

I thought my doll beautiful, but a few years later, when my sister received a doll with curly, shoulder-length hair, I looked at Virginia’s molded hair. The paint had rubbed away in spots. My doll needed real hair too, I decided. So next time my mom gave me a haircut, I didn’t ask her advice. I just coated Virginia’s head with rubber cement and pressed the clippings into the glue. I let it dry, but the results were not what I’d envisioned. Poor Virginia...the worst bad hair day ever!  Unfortunately, I couldn’t get it all off. So I took some brown enamel and painted over glue and remaining hair. When Virginia wore her ruffled dotted Swiss bonnet, she looked beautiful again.

As little girls do, I grew up. Virginia lay packed away with a few other treasures, growing older the same as me. I got married and had a child of my own. One day I rediscovered my old friend. Fine cracks now marred her painted complexion. And when had the tips of fingers and toes worn away? No matter. Little boys could play with dolls too. I gave my doll to toddler Robbie. Virginia had a fine time, riding on his Tonka truck and watching as he built a house of blocks around her. I heard Robbie’s squeal of delight as the blocks went flying, but thought nothing of it.

At cleanup time that evening, I found Virginia lying amidst the blocks. She’d suffered a fatal injury to her head. It was broken in three parts. I said a final goodbye to my old friend, but not to the memories.

A Doll for Christmas

My dear friend and Minnesota “sister,” Donna Gilbertson, shares this story just in time for Christmas. Thanks, Donna!

“I was born during the Dust Bowl years, while Daddy and Mom were ministerial students at Wessington Springs, SD. Just before graduation, Mom became very ill with a neurological disease. They left school and returned to Iowa where Daddy took any job he could find so he could take care of me and my helpless mother.

The Christmas I was eight, my friends were all hoping for baby dolls that cried ‘Mama’ and opened and shut their sparkling glassine eyes. I, too, wished for a doll like that.

On Christmas Eve, I hung my stocking near the evergreen branch “tree” tied to our stair banister, even though Daddy told me Santa wouldn’t bring much this year because times were tough all over the world, not just at our house.

In the morning, I awoke early and slipped down the stairs to see if my stocking was full. It hung from the banister just as limply as when I’d hung it there. Sadly, I turned to creep back up the stairs. Just as I reached the top, Daddy called from the bed in the living room where my parents slept: ‘Donna Mae, maybe your present was too big for your stocking. Maybe you should look around better.’

I went back and looked toward their bed. Nothing there. Nothing on the dresser at the foot of their bed. I pivoted to face the stairs again, silent tears running down my cheeks. Mom’s wooden wheelchair sat beside the stairway, near my stocking. In the wheelchair sat...my doll!

She had hair, and eyes that opened and shut. When I picked her up and turned her over, she warbled a week ‘Ma..Ma.’ I wiped my tears away on the sleeve of my nightie and took her over to my parent’s bed. They made room for me between them and there I cuddled, perfectly happy and content.

My doll’s hair was not perfect, her dress didn’t fit too well, and one arm was a little loose. Her eyes were no longer shiny and the eyelashes surrounding them were gone. That didn't really matter to me. She said ‘Ma..Ma’ and that was enough.

Later I learned that my daddy had walked up the railroad tracks in the falling snow to reach Riceville’s dry goods store before closing time. There he had found my doll, a reconditioned toy contributed by some family, and purchased it for one dollar. In those days one dollar might be a day's wages when he cut wood for someone's fireplace.

That’s why, when people said, ‘You were the apple of your dad’s eye,’ I could really believe I was loved. My daddy died of cancer in December of the year I turned ten. A year later in December my mom died of the disease which had attacked her when I was a toddler, and I went to live with an uncle and aunt. My doll became one of the most precious possessions I owned.”
Posted by Joan Husby at 8:36 PM No comments:

A Christmas Greeting for You

Candles on the Christmas Tree 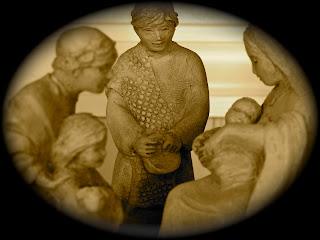 When we Rawlins children were young in the 1940s, money was scarcest at Christmas time. With five children in our family, close as stair steps,  frugal meant making do.

Excitement built as we threw ourselves into holiday preparations. We memorized songs and pieces for programs at school and Sunday school. Giggles and shushing came from various corners as we children used our imaginations and household scraps to fashion gifts for family members. Mama’s treadle sewing machine clacked downstairs at night, and Daddy worked in the garage behind closed doors.

We snipped white-paper snowflakes to decorate the windows. Mama pulled her stash of already-used wrapping paper from the far recesses of the under-the-stairs closet. Lois and I heated flatirons on the woodstove and ironed the creases out of the paper. We cut some into strips to make colored chains for the tree, fresh from the woods , damp smelling and spicy.

David and Patty, our youngest siblings, festooned the lower boughs with clumped tinsel. When they weren’t looking, Mama thinned the clumps, hanging the strands higher and more evenly until they glittered in the Aladdin lamp’s light like rain falling through sunshine. The beautiful cardboard angel in her cloud of spun glass soared from the topmost spire. The colored coating inside the old glass balls and blown-glass ornaments was flaking, but we noticed only if we looked really close. The finish on the blue and red and purple clip-on candleholders showed the shiny metal underneath, but who cared?

None of our town friends had candleholders. They used strings of big, glowing colored lights, but electricity hadn’t yet come to Robe Valley. The holders held candles about five inches high, twisted in pretty spirals. Keeping a bucket of water nearby in case of fire, we lit them on Christmas Eve and turned the lamps down. We sang a carol and watched the points of flickering light. Then we blew the candles out, to be lit once or twice more before the tree came down.

(From A Logger's Daughter: Growing Up in Washington's Woods)
Posted by Joan Husby at 2:40 PM No comments: 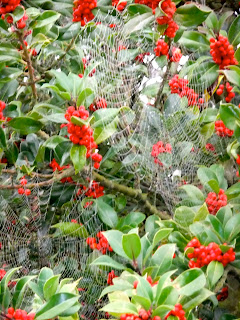 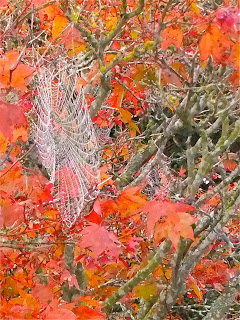 Recently we've been going through some of those deep waters we human beings find ourselves in now and then. My writing time has been sharply curtailed lately, but I'll grab a quiet moment this evening to share with you a couple of scenes Hank and I passed in our neighbor's yard one foggy October morning. Doesn't it look like the spiders were getting in the Christmas mood?

Posted by Joan Husby at 7:27 PM No comments: