Somewhere the Sun is Shining. . .

At home in Washington, the snowstorm moved on, leaving rain, rain, rain it its wake. San Diego also had rain, but yesterday the sun came out. Low tides drew crowds of people to the tide pools at Cabrillo National Monument at Point Loma, and we went, too. 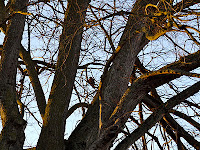 This has been one of those unpredictable winters with no snow, not much rain,  and occasional glorious sun breaks that make us feel lucky just to be alive.

Late one sunny afternoon this week, Hank came upstairs from his windowless office and said, “Let’s go up in the mountains to enjoy the sunshine.”

I glanced at the clock. “When we get there, it will be dark. Why don’t we go someplace close and look for birds?”

We grabbed our coats and the camera and headed toward Camano Island. By the time we reached the new Mark Clark Bridge a few miles from our home, the sun was already dipping toward the island. At the end of the bridge, Hank swung left onto Eide Road. We’d passed this spot hundreds of times but never ventured down to Leque Island, which lies between Port Susan and Skagit Bays.

The Eide family farmed there for nearly a century. Prior to settlement, the island had been entirely salt marsh. It now consists of wetlands and diked fields where contract farmers plant grain every year as food for wintering waterfowl. About 100 acres of Leque Island’s 325 acres is being restored to an intertidal estuary. This will provide habitat for juvenile salmon and also benefit other fish and wildlife.

We passed the bare spot where the Eide house had stood and continued beside the dike to a small parking area.  Almost immediately we spotted a juvenile eagle in a gnarled old cottonwood that once shaded the homestead. Birds flitted from branch to branch in smaller trees that may once have been an orchard.

Already the light was fading. We were out of sight of the highway. The dike hid the river and the town beyond. In the stillness, we heard the gabbling of snow geese. Soon loose skeins of hundreds of birds passed overhead, hurrying toward the tide flats to spend the night.

Rounding a bend in the road, we met a couple of men walking back to their vehicle. From the looks of their equipment, they were serious birdwatchers. They told us they’d seen a snowy owl. Our ears perked up. Snowy owls belong in northern Canada and Alaska. But this winter many are being spotted in our area and across the United States, some as far south as Kansas.

Ahead of us, huge bags of sand backed a wall of concrete blocks where storms, combined with high tides, had washed away the dike. A small, energetic woman with binoculars, camera, and a big spotting scope had established herself atop the barrier. We learned she’s a research ecologist, but she and her dog often come to this spot at sunset or early morning to watch the birds. (The dog was more interested in getting us to toss his ball than he was in the birds.)

She pointed out the dark female northern harriers and the smaller, lighter males swooping over the field, hunting for voles. Short-eared owls made soundless sorties of their own. Our new acquaintance offered to move her scope to an easier-to-reach spot on the dike, so we could see the snowy owl she’d been watching.

She focused the instrument and let us peer through it. Sure enough, far across the river we could see the fluffy, pale form of a female snowy owl sitting on a stump. Snowies are among the largest of the owls, with wingspans that can reach almost five feet. Since they’re native to the tundra, they seldom perch in trees but rest on driftwood or fence posts instead. They live on lemmings and other small mammals in the Arctic, but when the lemming population crashes or when there’s a bumper crop of juvenile owls, some are forced further south. That’s why happy birders in our area are getting a look at this sudden population increase, or irruption, of snowy owls.

We thanked our new  friend for showing us the rare visitor and walked back through the twilight to our car. Harriers and owls still ghosted low over the abandoned fields of Eide’s farm. Who knew what adventure waited when we dropped everything to answer the call of a sun break and the out-of-doors? 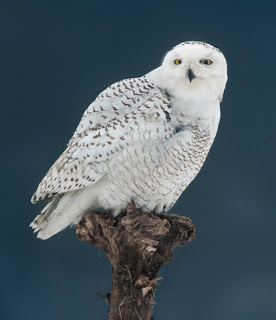