Have you thought that it takes the entire Bible to tell the Christmas story? From the first promises in the book of Genesis to the great climax in John’s Book of Revelation, it’s all setting for the angels, the shepherds, and the baby in the manger.

The Old Testament closes with the book of Malachi, who proclaims God’s promise: “I will send my messenger, who will prepare the way before me. Then suddenly the Lord you are seeking will come to his temple; the messenger of the covenant, whom you desire, will come,” says the Lord Almighty.” (Malachi 3:1, NIV)

God’s chosen people, Israel, knew the Old Testament promises, but they expected their coming King to be a conqueror who would vanquish their enemies and set up a powerful kingdom that would rival or exceed any contemporary kingdom. When the Lord came to his temple, it would surely be with great pomp and ceremony. His coming would be glorious. Unmistakable.

After Malachi, God seemed to be silent. Israel endured years of oppression under one foreign ruler after another. Then one day, after four hundred years of unfulfilled expectation, a young country mother and her husband brought their firstborn baby boy to the temple in Jerusalem. Following the law of Moses, they came to present him to the Lord and to redeem him with a sacrifice of a pair of turtledoves or two young pigeons. No one in the crowd that day particularly noticed Mary and Joseph. Young couples were always bringing their firstborn sons to the temple.

But two people recognized this baby as their King. Both were elderly. Both were righteous and devout. And both were looking for the consolation of Israel.

The Spirit of God had revealed to the first, Simeon, that he would not see death until he had seen the Lord’s Christ. When he saw the baby, he knew him! Imagine his joy when Mary allowed him to take the child in his arms. Imagine the people around him, turning puzzled faces as they heard him exult:  “Sovereign Lord, as you have promised, you may now dismiss your servant in peace. For my eyes have seen your salvation,  which you have prepared in the sight of all nations: a light for revelation to the Gentiles, and the glory of your people Israel.” (Luke 2:29-32, NIV)

Simeon spoke a few more words to Mary, words she would ponder in the years ahead: “This child is destined to cause the falling and rising of many in Israel, and to be a sign that will be spoken against, so that the thoughts of many hearts will be revealed. And a sword will pierce your own soul too.” (Luke 2:34-35)

A widow named Anna came up just then and heard what Simeon said. Anna was eighty-four years old and had spent most of her life serving in the temple, fasting and praying. When she saw the infant, she began giving thanks to God, rejoicing and speaking of him to all those who were looking for the redemption of Israel.

Many people in Israel longed for their King to come to his temple. Was the fulfilled promise less important because only Simeon and Anna recognized him?

No. God does his work through individuals. The words of Simeon and Anna confirmed to Mary and Joseph that the overwhelming events of recent months were truly God’s promises being fulfilled. Mary had to wait thirty-three more years to see the plan worked out. Her heart would be pierced as she watched her Son die on the cross. At that moment, did she think God’s promise had failed? Was she as surprised as anyone when the angels rolled the stone away and she saw her risen Savior? Perhaps it was at that moment the ponderings of her heart at last were satisfied. Her eyes too saw God’s salvation. Her little boy had become the light of revelation to the Gentiles and the glory of God’s people, Israel.

Does it seem that God is slow in keeping his promises? Israel waited four hundred years after Malachi to see the Lord suddenly come to his temple. And then most people didn’t recognize him.

Mary pondered the events of Jesus’ birth and the words of Simeon and Anna for more than thirty years before she really understood what God was doing. We too get impatient to see our deepest longings fulfilled. We wonder if God is at work or if he really will do what he says. We wonder why evil seems to win, and we wonder why good people suffer.

What comfort to know that God is the promise keeper. He promised that Jesus will come again, the triumphant and victorious King that Israel still waits for. When he comes, he will make all things right. And we will know the answers to all our questions.

The Light of Christmas 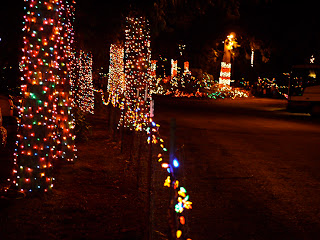 Our home is cozy this afternoon. Outside, it’s raining and foggy, two conditions that often coincide in northwest Washington’s winter weather. A gray blanket blots out Camano Island, Port Susan, and the Stillaguamish bottomlands and has tucked itself in against the bottom of our hill. Soon our outdoor holiday lights will come on, proclaiming that in spite of the dull weather, Christmas is coming.

At church last Sunday, we lit the second Advent candle on the wreath near the pulpit. This, the second of three purple candles, represents the love God has for us in sending Jesus as a babe in the manger. Advent is the Season of Lights, so on each of the five Sundays of Advent, we light one candle, the five together representing Christ, the Light of the World. The first purple candle stands for the hope of the prophets who foretold his coming, the second, his love. The third, a pink candle, represents joy. The fourth, which is purple, stands for peace. On Christmas Eve, we light the last candle, the white one, to signify that Christ has come into the world.

When we decorate our homes and streets with multitudes of twinkling lights at Christmastime, we are saying that the Light of the World is coming; better yet, he’s here.

I love that Christmas comes in the dark of winter. How better for us to know our need of light? How better to see the Light when he comes? Some people dread Christmas because of unhappy associations from the past. Others are living in murky times right now, times that fog the future. These circumstances...loss of jobs, divorce, death... can make one’s outlook as bleak as the fog that hides the view out our window.

We’ve had Christmases like that. Among them were financial hard times and frightening periods of illness. When our children were still young, my husband had a heart attack and lost his job, both in the same Christmas season. The kids and I decorated a tiny tree and took it to his hospital room, where we tried without much success to celebrate Christmas. Years later my father had emergency surgery in mid-December and died at the hospital. Five years ago we lost my mother on December 22, the day after her 99th birthday, and two Decembers later, we lost dear niece Tami to cancer. Those were seasons of darkness, yet because Jesus had come, they couldn’t blot out the Light. We still had hope, love, peace, and even a deep joy.

After lighting the Advent candle at church, we sang a song called, “One Day!” I’d not particularly noticed the third verse before. Here’s what it says:

One day they left him alone in the garden,
One day he rested, from suffering free;
Angels came down o’er His tomb to keep vigil,
Hope of the hopeless, my Savior is He!*
*Rev. J. Wilbur Chapman, D.D. and Chas. H. Marsh, 1910

Jesus suffered, not because of anything he had done, but to redeem us from the suffering caused by man’s sinful condition. He rested in the blackness of the garden tomb, then rose again to light our worlds.

When seasons of suffering come to us, we can rest in the darkness as Jesus did, knowing our heavenly Father sees what we’re going through. He will use our suffering for his good purpose.

Posted by Joan Husby at 4:14 PM No comments: