How to Change One’s Mind, or Running Athwart of the Generation Gap

(This is the blog I planned to post today. But first, I sent it to my writing friends for their opinions. I felt it had a crabby feel that didn’t fit the theme, “Sun Breaks.” After reading their comments, I knew I have a lot to learn about generational outlooks. Instead of hiding the blog away in a drawer, I’m going to post it, along with my friends’ opinions. I think you’ll enjoy the discussion, and if you have comments of your own, feel free to add them.)

Last night, a pert young waitress in one of the town’s nicer restaurants slid my plate in front of me. “Here you go, Sweetie,” she chirped.

I felt like sitting her down for a lesson in basic respect. She meant to be friendly, but when did it become okay for young people to treat their elders with such flippant familiarity?

In past generations, young people called most adults Mr. or Mrs., unless they were specifically invited to use a first name. Teachers or other professionals were always dignified by their title. A couple of years ago at Hank’s all-school reunion, he was thrilled to be seated next to his high-school principal.

“Call me Leo,” said the ex-principal.

I know how Hank felt. But there’s no problem for many of today’s students.  Children commonly address adults by their first names. In some schools, even teachers are addressed this way. Most people of my generation feel that using titles of respect brings about feelings of respect. To us, using proper titles seems like common courtesy.

When my mother resided in care centers in her later years, everyone from housekeepers to kitchen help to nursing assistants addressed the residents by their first names or by insincere terms of endearment. These people had built the nation, for goodness sake! They’d been business people, nurses, military personnel, parents...but in the minds of those who cared for them, old age seemed to have reduced them all to the level of small children.

I think the next time a young person in a store or restaurant calls me “Honey” or. . .shudder
. . .”Sweetie,” I shall draw myself up tall, give her my best schoolteacher glare, and say, “My dear, I could be your grandmother. I’m also a customer. If you want my business again, please let your language show respect for your customers.”

Now, here’s what other people had to say.
From Carolyn (from the Silent or Builder Generation) :

Right on, Joan! I absolutely abhor being called "Honey" or "Sweetie" by servers or anyone else I don't know. Even in the doctor's office everyone is called by first names--except the doctors, who expect to be addressed as "Doctor Jones."
The dentist my parents went to in Marysville always addressed my father as "Dr. Manus" (Dad had a Ph.D) and my mother as "Mrs. Manus." He knew how much it meant to them to be treated courteously and respectfully, especially when they were very elderly. He instructed his staff to do the same. When I took Mom and Dad to the Navy base, Dad rated a salute and was respectfully addressed as Col. Manus. There is a lot to be said for addressing people with courtesy titles--and "sir" and "ma'am" are part of that.

From Marj (a Builder):

The fruit of the Spirit is love and joy, and my desire is to show those characteristics to those I come in contact with. . .Young people who need to learn respect for elders (and I thoroughly agree with you on this) won't be reading this, and those who might will write it off as an old person's thing. It might have more value as a blog if you can approach the problem positively. Use it to comment on how we older people can respond to the young with love and kindness that will get their attention. I might have said to the young waitress, "I know you are trying to make me feel good with the word "Sweetie," but it really makes me feel a bit uncomfortable to be called that." I might add, "I may have a lot of years behind me, but I am still young at heart."

Here at the Lodge the caregivers, nurses, and all call me by my first name as they do everyone else. But I know by the way they say it and the way I am treated they respect me. They give me the feeling they would do anything they can for me. I have tried to show them respect and love, and they have responded positively.

From Diana (a Baby Boomer):

I have a slightly different viewpoint. I think this is a generational issue, not an issue about respect. We in the Boomer generation, at least on the West Coast, grew up with the view that addressing someone by a first name showed a willingness to accept that person as a peer and not relegate them to the category of an old fogy. This no doubt came as part of the "don't trust anyone over 30" nonsense we were subjected to. My generation, and those that follow it, truly mean no disrespect by using first names. If you were to say, “My dear, I could be your grandmother. I’m also a customer. If you want my business again, please let your language show respect for your customers,” I seriously doubt the "dear" would have any idea what she said that you considered so disrespectful.

I do know that it is very important to address African Americans by their titles and surnames outside the context of close friendship. When Oprah happens to address an older African-American woman in the audience, she always learns the name and proper title ahead of time and uses it. This stems directly from periods in our nation’s history when grown men were called "boys" in contexts where their white contemporaries were not, and many whites addressed blacks by their first names as if they were still in servitude.

Some of the Title/Surname use has turned a little topsy-turvy. You'll notice that in the court system, even the most disreputable defendant is referred to as Mr. or Ms. So-and-So. This is intended to maintain respect for someone who is innocent until proven guilty. At this time, however, it further establishes the younger generations' view that using a more familiar name or endearment conveys approval and respect instead of the opposite.

. . .Personally, I don't mind when a waitress or clerk calls me Sweetie--although, for a different reason, I would give a male clerk or waiter a dirty look if he called me that. Anyway, Sweetie is far better than some other things I've been called in my life, and I recognize that the intent is one of blessing, not disrespect.

From Cindi (also a Boomer):

I, too like to be respected in my profession. But I'd rather have my students' parents and my students honestly communicate and engage in conversation with me, than have them give me a proper title.

From Agnes (a Builder):
As an "oldie," I confess that it doesn't bother me in the least to have someone call me "honey" or even "sweetie." It's done so often that it just runs off my back, and I think nothing of it. That's just the way some waitresses talk. When we were in the Philippines, parents of missionary kids told them to call us adults "aunt" or "uncle." So as a teacher there, I was "Aunt Atchie," and those kids now grown still call me that.

So although . . . it's nice to be called a respectful name, I agree with Marj's and Diana's comments too. I think it really is a cultural, age-related matter.

From Marva (19 years old)
I would never call an elder "Sweetie." I could never call my principal by his first name. Obviously my parents taught us to use respectful language to people who are older than us.
(I can vouch for Marva. She's my dear granddaughter.)
* * *

So, here we have it. What do you think? 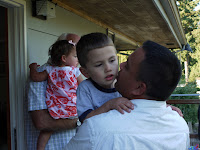 I’m writing this while waiting for a friend in a Mt. Vernon public health clinic. I’m thinking how much I love this country of ours. I loved the way it was when I was young and most people lived in communities where everyone shared the same background and experiences. I love the way it is now, enriched by people from every nation under the sun.

Mt. Vernon is a farming town with a large Hispanic population. Most came here originally to help grow and harvest the berries, corn, cucumbers and other crops that make this area one of the nation’s most bountiful food baskets. They’re on the way toward realizing the American dream for themselves, just as my ancestors did. But for now they need the extra help this clinic provides.

The waiting room is filled mostly with people who have beautiful brown skin and dark eyes. The fluid cadences of their native languages flow around me. It makes me feel as if I’ve been dropped into another country, but it doesn’t seem strange to my younger friends. They have grown up with playmates and school friends of many national backgrounds.

It’s still a marvel to me, all these colors, languages and cultures tossed together to make up this country called the United States of America. It’s the same way across the border in Canada. Sometimes the uniting doesn’t go smoothly. The good thing is we’re working at it. We’re hopeful about it. We appreciate the contributions immigrants bring to this country, even while we argue about who gets to come and how.

It occurs to me that our country isn’t really about being a melting pot anymore. It’s more like a salad bowl. Salads are full of intriguing flavors, textures, contrasts--much more interesting than the bland blended flavors of something out of a “melting pot.” 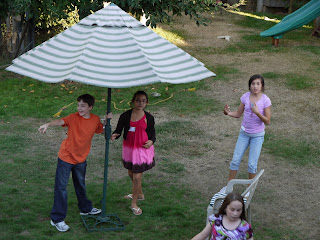 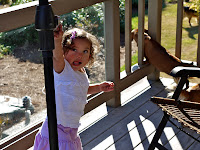 These people are just a few members of my own rainbow family. We are Norwegian, German, Chinese, English, Native Hawaiian, Cherokee, Native Alaskan, French, African American, Hispanic...and soon, a baby boy from Korea will join us. 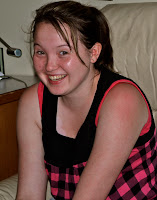 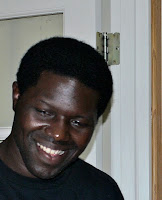 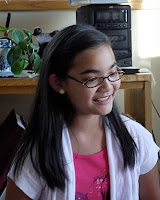 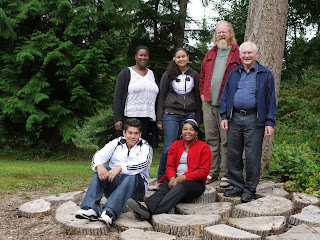