There’s a longing in all people to belong. God planned that this longing should culminate in marriage and family.

Because we’re human and subject to the weaknesses and poor judgement of humanity,  the blueprint often gets messed up. Children are left orphans or are abandoned by parents. Marriages end through death or divorce. Families can get complicated.

When my first husband died, our young adult children were left with a dad-sized hole in their lives. After I married Hank, though he could never exactly fit that hole, he did his best to love my kids. And I did the same for his five children, each of whom had their own tales of hurts from the past. With all the relationships represented in the lives of each of these nine people (Hank, myself, and our combined seven offspring), there’s room for a lot of family building and rebuilding.

When he married Lois, Hank was raising four small children by himself. Lois had a toddler son, Nathan, born after her first husband abandoned her. Hank adopted Nate. Nate’s birth father went on to marry and father other children, but Nate did not know them until he attended college near where they lived. Then he met his half-brother and was delighted to find out how many interests and values they share. Now Nate spends vacations with his brother and family.

When my son Rob married, he also adopted his wife’s child, my granddaughter Marva. Lydia had a son too, who was being raised by his birth father. We saw him occasionally during his growing up years, but not until he was an adult and his father died, did he really become part of our family. He’s a wonderful, thoughtful young man, a grandson I’ve only recently been able to claim.

Hank’s daughter Carmen got married at age 18 to Ben, who was raising three children alone. Those children knew there were three half-brothers born later to their mother, but what they didn’t know until recently was they also had a half-sister who’d been given up for adoption and raised as part of a happy, stable family. Through the wonders of modern technology, Kendra discovered the three half-brothers and through them, the three siblings Carmen had raised and then adopted as adults after Ben died of cancer. We were there at the family picnic to meet Kendra, her husband and her children and watch the reunited siblings and their children get acquainted. What a joyful time!

Some years after our marriage, we attended a family reunion in Hank’s home town. An honored guest at that reunion was an 82-year-old cousin, Jud, who’d just been discovered by the family. Born during the depression to a destitute mother, he’d been given up for adoption to a loving family. He grew up never knowing he had six younger brothers and sisters living nearby, nor did they know about him. While his daughter was using the Internet to research family geneology, she discovered his connection to Hank’s family. We looked on as Jud and his siblings met and caught up on all the years of unshared history. Proof of relationship came through the uncanny resemblance between Jud and Hank’s cousin, John.

The Bible says God puts the lonely in families. I think it’s delightful to watch the many ways in which he does it.

Good Samaritans to the Rescue

Last Saturday's picnic turned out quite differently than planned.

The October weather couldn't have been lovelier as we headed out to look for a picnic spot along the Mountain Loop Highway. But the parks we passed were closed for the season. As we passed the road  leading up Mt. Pilchuck, I suggested to Hank we turn there. We could always eat our sandwiches in the car, and we'd have a grand view.

As the potholed road wound up the mountain, I remembered all the times in the past I'd been up that road, and the times in my youth before the road existed, when we started at the river in the valley below and hiked five miles or more to the lookout at the top of Mt. Pilchuck. We shared the trail with very few people then, but things have changed. The hike is shorter now. It's one of the most popular trails in Snohomish County.

As we neared the end of the road, we passed a spate of cars coming down. Good! That should mean plenty of parking would be available. But no, the graded area at the end of the road was filled with vehicles. There must have been hundreds of people up on the mountain. (We found out later that there'd been a wedding in the woods along the trail. The cars that passed us were probably guests leaving. Someone told us they'd seen the bride and groom, in jeans and hiking boots, put their balloons and leftover wedding cake in their car. Then the bride tied her hair up in a pony tail and away they went, up the trail!)

Hank spied a place large enough for our car and one other, if he nosed it up on a rocky berm.
So he did that, and suddenly we felt a front corner drop a few inches. A Ukrainian boy passing with a group of other young people called out, "You popped your tire."

So we had, the first flat tire in the twelve years we'd had our Honda Odyssey. One of the young people offered to change the tire for us, but it was two o'clock and Hank declined the offer, needing some food in his stomach before doing anything else.

We hauled our folding chairs to the brink of the overlook and enjoyed a picnic with a view. The valley where I grew up spread below us. Beyond Green Mountain to the north, we could see the Cascade peaks on into Canada. To the west was Puget Sound with its islands, to the south, the Olympic Mountains. Somewhere out there in the haze lay Everett and other communities. And behind us loomed the rocky crest of Mount Pilchuck with all those hikers. 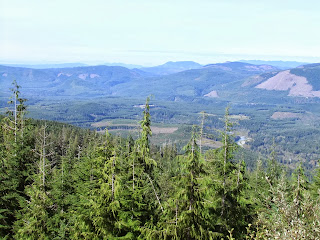 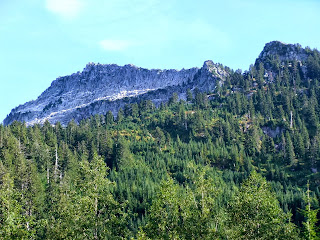 We finished our coffee and turned to the task at hand. There must be a spare tire and a jack somewhere in the car, although we'd never used it. I pulled the manual from the glove compartment and discovered they were stored in a compartment between the front two rows of seats. After a struggle, we dislodged and hauled them out. The spare with its wheel was about half the size of the other tires. The jack looked like a toy. And the wheel with the flat looked huge and heavy.

About then, a young man came down the trail to the car parked next to us. He saw our problem and offered to help. He sat on the ground and turned the wimpy little crank on the jack around and around, lifting the big van until there was room to loosen the lugs on the tire and remove it. He put the spare in its place and lowered the car to the ground. The tire had seemed firm, but under the car's weight, it too went flat. We asked people arriving and leaving if anyone had a tire pump, but no one did.

"No problem," Hank said. "We have Triple A." He thanked the helpful young man, who left. Hank went to the brink of the overlook, the only place our phone got reception. But he couldn't get through. A truck pulled into the empty spot beside us with a couple just out for a drive, not a hike. The man offered his more powerful cell phone. Then we waited and waited for the AAA receptionist to call back with news that a tow truck was on its way. The couple waited with us. Finally she called back, apologetic. Five or six companies had refused the job. They would not take their trucks out on a graveled mountain road and risk damaging them.

So the helpful Samaritan, Brock, put our tire in his truck and drove it and Hank down the mountain and back to Granite Falls, a round trip of about 35 miles. They got there just as the mechanic was closing up shop. He discovered a rock puncture in the tire, repaired and aired it up, and Hank and Brock returned to the parking area where Brock's friend Linda had been keeping me company. By the time they got there, the temperature had dropped. Linda and I were sitting in the car, watching hikers pour off the mountain, hoping the men would get back before dark so we wouldn't be alone.

Brock soon had the tire back on the car. Though he didn't want to take it, we gave him the little money we had with us to help pay for his gas. He and Linda waved and headed down the mountain. By the time we reached the main road, darkness had descended and they were long gone.

We are so grateful for the good and generous people that still walk the earth. Thank you, Brock and Linda and all the other good Samaritans for "paying it forward." When our turn comes, I hope we won't need to change a heavy, dirty tire like you did for us.

As we drove home from Camano Island this afternoon, we found the intersection of Marine Drive and Highway 520 lined with people of various ages, each holding a poster. Some said simply, "Jesus Heals and Forgives." One said, "Abortion Stops a Beating Heart." The one that held my attention showed a little child reaching for its mother's hand. The caption read, "Take my hand, not my life." My eyes flooded with tears. That one photo said everything to me that can be said about abortion.

Something very similar happened yesterday. We'd reserved the beautiful fall day for a picnic at Verlot, but arrived in Granite Falls just as the annual Railroad Days Parade was making its way through town. Trying to find our way around the blocked-off route, we found ourselves facing the oncoming parade. One single parking spot waited just ahead. So we grabbed it and walked a half block to a perfect, unobstructed viewing spot, where we watched participants turn a corner and march on to the disbanding area.

Just as we got to the corner, a large group of adults and children arrived, preceded by a sign saying they were from Monte Cristo Elementary, a school nationally recognized for their efforts to honor military veterans. The marchers carried oversized portraits of Washington military people who have given their lives in service to their country. Again, tears threatened to overflow. Real people. Real lives, cut short so that we could enjoy these beautiful fall days with the freedom to stand for what we believe. 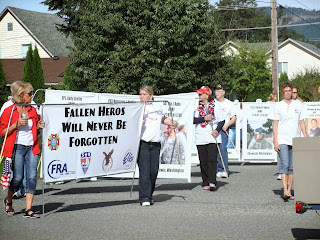 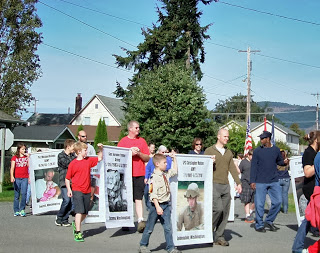 Posted by Joan Husby at 4:00 PM No comments: