Living in Washington’s Robe Valley, miles from the big city, our every-other-Saturday trips to Everett for groceries and other necessary errands were big deals. With five youngsters in tow, I suppose they were probably ordeals for our parents. When everyone was good, a special treat sometimes waited when we finished all the errands.

Our favorite shop was located just down Colby Avenue from the Safeway store. We’d line up on the sidewalk and through a window watch rounds of dough ride a conveyer belt into a long narrow vat of hot grease. As they cooked, they’d rise to the top of the bubbling liquid and bob along until a mechanism flipped them over. By the time they reached the end of the vat, they were golden brown on both sides and smelled irresistible.

Inside the shop, we faced excruciating choices. Did we want chocolate- frosted doughnuts or some with sprinkles? Did we want the big puffy, sugary kind or crunchy, old-fashioned doughnuts? Sometimes we each chose our own. If we took too long to decide, Dad made the choice and we all got the same. No matter what, they were unforgettably soft and fresh and delicious. Not a crumb went to waste, not even the sugar clinging to our fingers. Sometimes, if money was especially scarce, we’d buy a paper bag full of fried doughnut holes to share. They were just as good, and we could have more than one, so that was fine with us.

One more thing about that shop impressed me. On the wall above our heads was a picture of two men in medieval costume, each holding a doughnut. One man scowled at the skinny doughnut he held. The other smiled as he contemplated a doughnut so plump it had scarcely any hole. They leaned against a signboard that read:

As you ramble on through life, brother
Whatever be your goal,
Keep your eye upon the doughnut
And not upon the hole.

Back then I wasn’t sure if I agreed with the poem. After all, we thought the holes were pretty good. Eventually, I realized the verse meant the hole in the doughnut, not the bits of dough the baker fried up for us.

It was a homey lesson and a good one for me. My parents’ struggles during the great depression had influenced their attitude and then mine. Their unconscious motto seemed to be, “Expect the worst, and you’ll be pleasantly surprised when you don’t get it.” All my life, I’ve tended to examine the negatives of a possible decision before considering the upside, “erring on the side of caution.”

But most of the time, it’s good to ignore the bumps in the road or the rain clouds in the sky and to keep our eyes on the possibilities of life’s doughnuts. 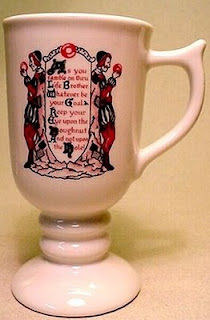 When I went looking for the “Doughnut Hole Poem” on the internet, I was delighted to find this photo posted on Flickr, by EraPhernalia Vintage. The mug is restaurant ware, circa 1965, and it’s exactly the picture I remember from the 1940s.

Here are other gleanings from an internet site at : http://www.barrypopik.com/index.php/new_york_city/entry/keep_your_eye_
upon_the_donut_optimists_creed/.

The Mayflower coffee and donut shops (1930s-1970s) used this "Optimist's Creed" as its motto. In 1931 Adolph Levitt opened the first Mayflower doughnut shop. (...) Mayflower shops, all bearing the trademarked Optimist's Creed, dotted the city for decades, but had all but disappeared by the 1970's.

The bit of doggerel was the personal motto of the founder. Known as the Optimist's Creed, the words were printed on each box of doughnuts sold in the Mayflower shops, where they were framed by two cartoon jesters, one frowning at a thin doughnut with a large hole, the other grinning at a plump one with almost no hole at all.


20 January 1972, Christian Science Monitor, pg. 10:
Doughnuts: the hole story
(...)
Way back in 1932, FDR and Herbert Hoover added a homey touch to their campaigns by eating doughnuts at whistle-stop rallies. With the U.S. in the depths of a depression, both candidates, by coincidence, worked the "Optimists' Creed" into their speeches on several occasions...
Posted by Joan Husby at 6:28 PM