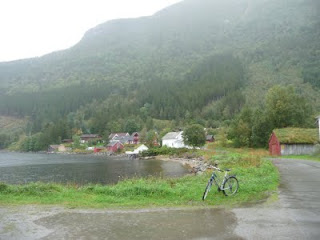 Part of the village of Øksendal in the municipality of Sunndalsøra, where Kathi found her roots.

In this nation of immigrants, most of us can trace our ancestry back to pioneers of one kind or other. My adventurous stepdaughter, Kathi, lives in Naples, Italy, and takes the opportunity to travel in many European countries. Most recently she set out for Norway to find Sunndal, the community her great-grandfather, Jon Anderssen Husby, left in 1882, when he emigrated to the Pacific Northwest at the age of 19.

With information provided by Don Reinseth, a distant cousin in Washington State, and armed with a great deal of pioneering boldness, she found where Jon was born, the house where he was raised, and the farm where he worked before emigrating. She also found a number of relatives she didn’t know she had.

Due to the modern electronic miracles of e-mail and Facebook, she was able to share her research, her adventures as they happened, and pictures as well. 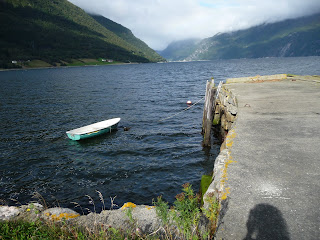 The sun breaks through on the Øksendal pier, at the tip of the Sunndalsøra fjord.

In her Sunndalsøra hotel, Kathi met a girl who Googled the Norway phone pages in both Sunndalsøra and nearby Øksendal for Husbys and gave her directions to the nursing home. Along the way Kathi took dozens of photos of Husby grave markers, in cemeteries that dated back to the 1200s.

Five patients in the nursing home were named Husby, but all were too sick to talk to her. An assistant and a guest there looked at her telephone list and recommended that she talk to a man named Per Steiner Husby. With help from the clerk at the Øksendal store (also named Husby), she found the Per Steiner Husby farm. Per and his wife had already received two calls telling them that an American was looking for them.

They pulled out volumes of family history that have been compiled back to before the 1700s but couldn’t seem to find Jon (pronounced Yone) Andersson Husby. So they called another cousin, Helge Husby, who turned out to be one of the contacts Kathi had been given by Don Reinseth in America. It was Helge’s opinion that Jon Andersson Husby was actually born Jon Andersson (Anderssen) Sjølset (Sjølseth). Because the birth dates and American emigration dates match, he believes that they were the same person.

Per’s wife took Kathi to see the place where Jon lived as a young man. The house was not the original, but some of the other structures, including the boathouse, were present when Jon lived there.

Later, Marie Husby, the clerk from the little store, took her to see another family. They poured over a volume of family histories from Øksendal, excitedly turning pages and making phone calls. Then they took her to a farm called the Sjølseth/Sjølseth farm. They had also deduced that Jon Anderssen Husby was born to Anders Larsen from the Sjølseth farm and that, indeed, Jon actually was born Jon Anderssen Sjølseth. (People often took the place names of where they lived as their surnames.) Jon had evidently changed his name to Husby at some later date. Perhaps the immigration officials in America could neither pronounce or spell Sjølseth, so he gave them a name they could handle.

However it happened, Kathi found herself standing on the ground in Norway where both her great-grandfather and great-great-grandfather had lived, surrounded by newly found relatives.
She still has unanswered questions. Why did Jon leave the beautiful fjords and farms of Norway to become a logger in Western Washington? Why did his descendants on both sides of the Atlantic lose track of each other? Why is so little known of his story?

It’s up to pioneering modern-day researchers like Kathi to fill in the blanks of the past. 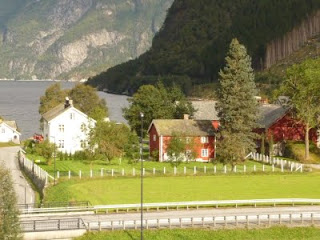 This is the farm where both Jon and his father worked. Kathy can't officially determine that it was a Husby farm. If Jon's father was not an oldest son, then he would not have had his own farm. In that case, they would probably have worked for someone else. If that someone else had been a Husby, that might explain why Jon took that last name. Husby is also the name for "house by a city" or for a group of houses. So Jon could have taken the name for a neighborhood. The original farmhouse is on the left. All photos by Kathi Ferguson