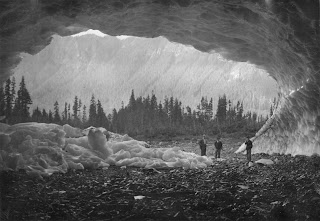 Hot Weather Weakens Ice Caves. This recent headline told a familiar story. The ice caves at Big Four Mountain are a favorite hiking destination for people in our part of Washington State and have been ever since Big Four Resort was built in 1921 at the foot of its namesake mountain.

Every spring, snow avalanches fall from Big Four’s sheer cliffs and pack to glacier hardness. Cascading waterfalls burrow under the ice, forming caves that tempt the ignorant or foolhardy to enter. Almost every year, in spite of warning signs at the trailhead, someone is hurt. A few people have died under collapsing ice. The newspaper story in question was triggered by another such incident. Someone, probably climbing on the glaciers or the cliffs above, had slipped and fallen. Rescuers passed through one of the caves to help him, and got out just as chunks of ice came crashing down behind them.

But for those who use good sense, the ice caves make a spectacular outing. The trail is smooth and mostly level for a good part of its one-mile length, making it handicapped-accessible to and even past the newly ins 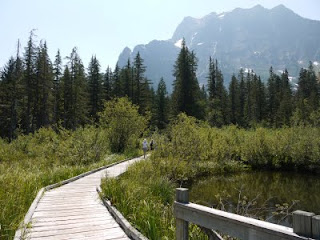 talled bridge over the Stillaguamish. It begins as a plank walkway over wetlands, where you can lean over a railing to watch small trout schooling in the shallow water. Walkers have a choice of turning off on a trail which loops back to the trailhead via the roadbed of the old Everett to Monte Cristo Railroad or continuing on through some old growth trees to the river and up to the foot of the mountain.


Beyond the bridge, the stream from the glaciers enters the river and the trail begins a moderate climb. Along the way, hikers see all stages in the life of the forest, from seedlings growing on nurse logs to decaying snags that house bugs and birds. Once we were lucky enough to see one of these snags topple to the ground without warning. We were also fortunate to be far enough away that the many-ton behemoth missed us!

The last part of the trail is the most difficult. A recent winter’s avalanches, adding to the devastation of previous slides, snapped trees in half or completely uprooted them. One of the avalanches took out part of the trail, necessitating a detour. But the new gaps in the forest afford one a sneak preview of what awaits around the last corner. The massive wall of rock, with snowfields sloping upward from the base, is breathtaking.

Below: Avalanche passed this way 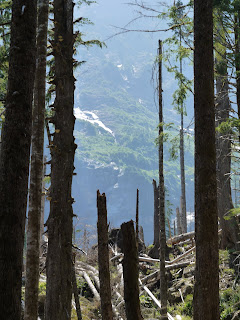 
In fact, in whichever direction you turn, the scene is breathtaking, even with a summer’s worth of dirt begriming the glaciers. Just remember, if you go, obey the signs warning against too close an inspection! 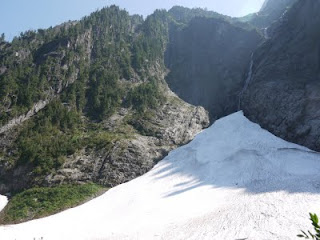 Snowfields at the base of Big Four 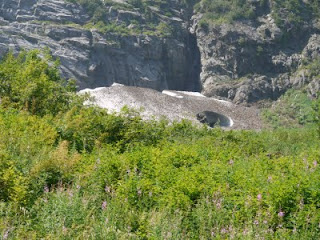 Don't climb on this cave's roof ! 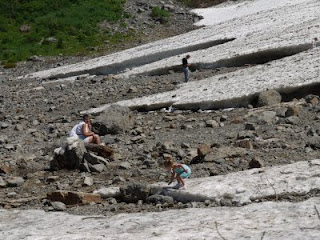 Cooling off in the rush of chill air from the caves 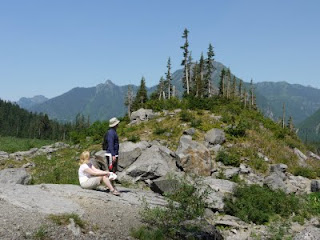 Feeling close to creation and its Creator
Posted by Joan Husby at 3:44 PM