In Defense of Big Families 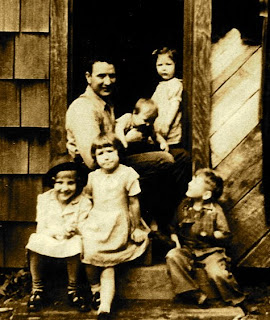 Delbert Rawlins and his five offspring, in the doorway of our "new" house.

Today, big families are the stuff of TV reality shows.
In my grandparents’ generation, they were simply reality. Grandmother Rawlins raised seven children. Grandma Schmidt gave birth to eleven, eight of whom lived to adulthood.

Those fifteen children raised smaller families, but still, having four or more babies wasn’t unusual. In the next generation, the size of the families dwindled to two or three children. And now our children are raising children...maybe. Of the five siblings in my immediate family, several of their offspring have no children. Four of the offspring have one child apiece. Only one had as many as four babies.

There are lots of reasons for this. Almost every mother is expected to work outside the home today. Children are not needed to help with the family workload like they were in their grandparent’s day. Young people expect to have a career and to make a good living before they even think about having families, and some wait until their biological clocks are on their last ticks.

Years ago I asked my dad why, when making enough money to live on was so difficult, he and Mom had had so many children, so closely spaced. He looked nonplused. “They just came,” he said.

I had barely turned six when brother David, the last of us, was born. Five children in six years and one month! Poor Mom scarcely had time to recover from the last birth before becoming pregnant again. She said she cried when she realized another baby was on the way. An aunt who prided herself at having stopped at two well-spaced siblings criticized our parents for having “all those children” so close together. “How do you expect to care for them when times are so hard?”

We children were blissfully unaware of all that. We didn’t even know that a new brother was joining the family until the evening Daddy picked us up from various neighbors who’d been caring for us for nearly ten days. He drove us to the hospital in Everett.

Daddy left us in the car with an admonition to be good. “I’ll be right back with a surprise,” he said. In minutes the doors of the hospital swung open. Light flooded out, and we saw a white-uniformed nurse pushing a wheelchair toward our old car. Mama sat in the wheelchair, holding a bundle on her lap.

Daddy stowed her suitcase in the trunk, then took the bundle while the nurse helped Mama into the car. He placed the bundle in Mama’s arms as we children crowded close to the back of the bench seat to hug and greet her. She turned around with smiles and a few tears at seeing us again. Of that moment, she later said, “I’ll never forget all those little round faces peering like moons over the seat back.”

Then the bundle squirmed and made odd little noises. Mama folded back the blanket to show us little-round-face number five, twisting itself into an outraged wail. We had a new baby, and with five children in the family, we would never lack for someone to fight with or have fun with.

Children are precious and should be treasured. There’s a lot to be said for big families. 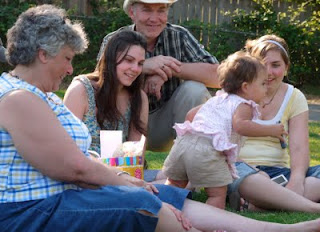 Baby Grace Mooring makes new friends at a family reunion.
Posted by Joan Husby at 10:49 AM