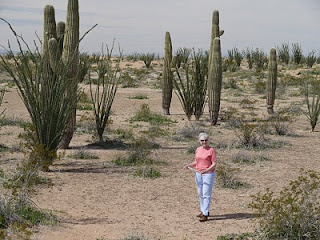 Desert Dunes near Bouse, Arizona
It seems a lifetime ago when I dreamed of moving to Arizona. Somewhere I’d come across the magazine, Arizona Highways. Full-page photographs showed glorious blue skies, vast untrammeled vistas of mountains and wildflowers and Indian ruins, cacti and wild animals and beautiful Southwest art.

After teaching for three years in rainy Washington State, I thought the time had come to follow my heart to Arizona. So I handed in my resignation and applied to teach in several Arizona towns. When school let out for the summer, my sister and I set out on a road trip. I planned to interview for teaching positions while we explored California and Arizona.

But at my first interview, I was told, “We cannot hire you. You are still employed at your old school.” It turned out that my resignation had never reached the right officials. Without even seeing Arizona, we turned around and headed back to Washington.

That September, I met Bob, a young engineer from Alaska. We married in March and went to Alaska, about as far away from Arizona as we could have gone and still be in the USA. We raised our family in Alaska and I came to love the state. I continued to drool over the photos in Arizona Highways, but God had given me many of the desires of my heart and I was happy.

Our children grew up. When my husband got sick, we returned to Washington. Before he died, we spent a winter traveling in Arizona. I even wrote a mystery-adventure book for young people and set the story in the state. By then there were elderly parents to care for and lots of friends and loved ones I didn’t want to leave behind.

Hank and I found each other and married. Then my daughter married a young man from Arizona. He loved Arizona as much as she loved Washington. They moved to Tucson. Some of Hank’s relatives lived in Arizona and we both had friends there. We began to spend several weeks each early spring visiting loved ones and exploring the state. We've been doing it for ten years now.

It’s true that Arizona’s skies are a glorious blue...usually. You can still find untrammeled vistas, in some places. There are cacti, everywhere. There are artists and Indian ruins and lots and lots of mountains, completely unlike their counterparts in Washington. We come to Arizona at the choicest time of year, between winter’s chill and summer’s unbearable heat. In between, we read stories by J.A. Jance, Tony Hillerman, and other Arizona-based authors and experience vicariously what we are missing in person.

It’s the best of many worlds, and a dream fulfilled. I’m not complaining at how long it took to see it realized!
Posted by Joan Husby at 8:24 PM