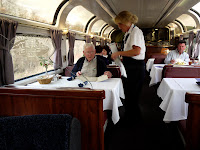 When we wanted to visit friends and relatives in Arizona and California this spring, we decided to try Amtrak’s Coast Starliner. I bought our tickets on-line. Daughter-in-law Lydia drove us to King Street Station in Seattle. We checked our largest bags at the gate, waited a few minutes, then walked down the platform to board our sleeping car. Our compartment was up the stairs and to the left. The aroma of fresh coffee greeted us at the top of the stairs. We stashed our carry-ons next to our facing seats, helped ourselves to free coffee at the juice-and-coffee   kiosk, and settled in to our home away from home  for the next two days.

Our tiny compartment, about the size of our dining table at home, had privacy curtains on the door and windows. Facing cushioned seats made into a bunk for sleeping. A narrower bunk folded down from the ceiling. We had a folding table, reading lights, temperature controls, and pillows. We could move about the train and ride in the lounge cars if we wished. Meals came with our sleeping car fare. Conductors took reservations for when we wanted to eat. Each meal had a choice of two delicious entrees and a selection of deserts. There was also a snack car. If we’d wanted to save money, we could have chosen to ride in the coach cars and sleep in reclining seats.

I’d planned to catch up on letter writing but unless the train went very slowly or stopped on a siding to wait for another train to pass, the ride wasn’t smooth enough for that. However, we could read. And the lady in the compartment across the aisle had no trouble making her knitting needles fly.

The scenery kept us glued to the windows anyway. Much of it was new to us, since the train mostly follows a different route than the highways. Sitting high above the passing countryside gives one an expanded viewpoint. We saw some of the best of America from the train (as well as some of its seamier side in the larger cities.)

After leaving Seattle, we followed the shores of beautiful Puget Sound. Near Tacoma, we passed beneath the twin Tacoma Narrows bridges and marveled at that feat of engineering. Later we went by huge heaps of silt, once part of volcanic Mt. St. Helens, that had been dredged from the Toutle and Columbia Rivers. We saw freighters loading in the Columbia and people fishing from small boats on Oregon’s Willamette River. We spied on houseboats anchored along sloughs and looked into the backyards of families in residential areas. Sometimes we saw homeless people huddling outside makeshift shelters.

Now and then the train stopped to take on passengers. Then we could get off to stretch our legs and shake some kinks out. Walking the aisles is always an option for exercise...but keeping one’s balance while the train hurtles along at top speed is a little hazardous for senior citizens.

Darkness fell while we enjoyed a leisurely gourmet dinner in the parlor car, with white linen and fresh flowers on the tables. Afterward we visited with fellow passengers in  comfortable armchairs in the adjacent lounge. When we returned to our Pullman car, a conductor had made up our beds for us. Some cars have their own little sinks, but we used one of the nearby bathrooms for washing and brushing teeth. Getting ready for bed in a 14” x 36” strip of floor space was an interesting experience, as was getting into my narrow upper bunk. I told Hank it felt like going to bed on an ironing board, but a safety net clipped to the ceiling assured me I wouldn’t fall out. The motion of the train rocked us to sleep.

One time when the motion stopped, I leaned over to look out the window and saw snow on the ground. We were somewhere in the Cascade Mountains between Oregon and California.

Daylight found us passing through a wide, wet area of farmland and marshes. (Later on Wikipedia I discovered that this was Suisun Marsh north of Suisun Bay, at the confluence of the Sacramento and San Joaquin Rivers...the largest marsh in California.) Incredulous, I said to Hank, “There’s a warship sitting in that field out there.” Another ship appeared, then a whole group of them lined up along the horizon. We saw water glimmering behind them and realized they were anchored along the shore of a bay...the U.S. Navy’s ghost fleet of mothballed ships in San Pablo Bay, CA. A while later we saw the Golden Gate Bridge in the distance. 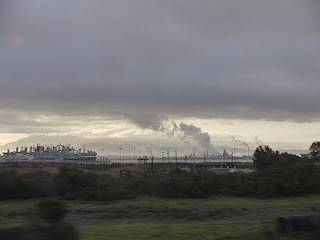 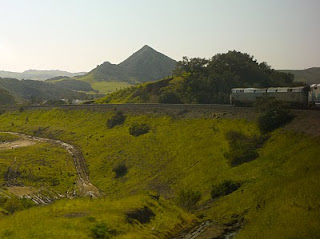 This year’s El Nino, which brought us Washingtonians an unusually warm and dry winter, delivered rain in deluges to the Southwest. California’s valleys were still drenched, but burgeoning with new crops. Sleek cattle grazed on hills as emerald as any in Ireland. We glimpsed the ocean between distant mountain ridges. The train chugged through tunnels beneath the cattle on the hilltops  and eventually descended to the Pacific coast. For many miles we watched the wind blowing white manes from curling breakers. Picture-perfect beaches were mostly deserted. 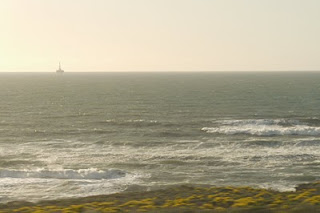 As the sun went down, we made out the silhouettes of drilling platforms far out in the Santa Barbara channel. As we ate our last meal on the train, darkness fell, turning the platforms into a line of lighted Christmas trees. We pulled into the Los Angeles Union Station around 10 pm and disembarked, along with the staff who’d been on duty for four straight days. The lady in charge of the dining car told us she works 70 hours in those four days. She looked very ready for her three-day rest. And we were ready to find our rental car and motel room, both of which we’d arranged for on-line, and then to continue our vacation.

But that’s another story.

Are you tired of airline hassles and freeway traffic? Maybe America’s rail lines are the way to go for your next trip.
Posted by Joan Husby at 9:47 PM