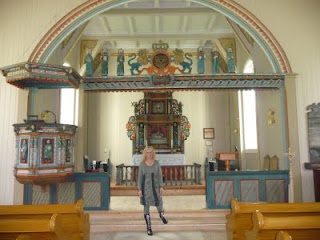 Kathi in her Scandanavian rainboots at the front of the beautiful church in Oksendal. The altar, carvings and other decorations were used in the previous church which dated back to the 1700s. 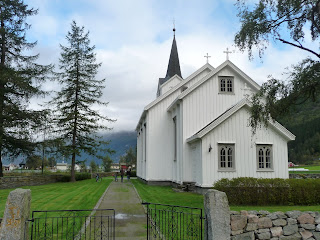 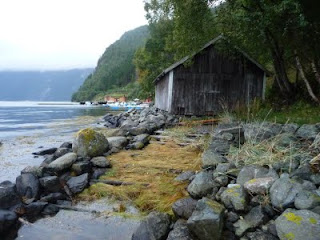 Back view of the Evangelical Lutheran Church at Øksendal


The boathouse once used by Jon Husby. When the tide
came in, it was easy to get boats down the ramp.

While searching for her Norwegian roots in the village of Øksendal, Norway, stepdaughter Kathi discovered the farm where her great grandfather, Jon Andersson (Sjølseth) Husby, had lived and worked. Although the house was not the original, several original structures, including the boat house at the edge of the fjord, remained on the property. She felt overwhelmed to stand where her ancestors once lived and commented, “I still don’t quite know what to do with my feelings of being connected to something much larger than myself.”

As she inquired after local Husbys in a little store, one customer introduced himself. He was Børd Bøye, pastor or preste of the local Evangelical Lutheran state church. She attended church the following day, thinking that she would have a better chance of meeting family there.

The present church building had been constructed in 1890, so the family members that Great-grandfather Jon left behind when he went to America would have worshipped in that location. The altar and decorative pieces inside were from the original church built in the 1700s and would have been familiar to him.

Only a few adults attended the service, apparently for their children’s benefit since it was a special Thanksgiving service. Kathi had discovered that most adults in Øksendal seem to believe that religion is a root cause of the world’s problems, (a common theme, in Kathi’s opinion, when people become prosperous and self-reliant.) Although the entire service was in Norwegian, she tried to follow along with the singing. Afterwards, everyone had hot dogs at the back of the church to celebrate Thanksgiving and then left.

Pastor Bøye offered to show Kathi the bell tower. They climbed up a dark, steep stairway that gave way to a ladder, then scaffolding, then foot-and-hand holds. He opened a panel in the wall so she could see out and take photographs. All of the old furniture was stored in the attic. She felt awed to see the very seats her ancestors had used when they worshipped.

After they climbed down from the bell tower, Kathi sat with Pastor Bøye on the steps of the church and talked. His story broke her heart. He had been at the church for eleven years and had made no discernible difference to the adults at all. He shared his dream that the people of Øksendal would become a blessing to others and themselves and that they might grow in their relationship to God and to each other. He longs to see every home a praying home.

As I heard this, I remembered Kathi’s great-grandfather, who brought his vital faith with him to America, and all the other Norwegian pioneers whose faith gave them the strength and courage to build new lives in a new land.

Kathi prayed with Pastor Bøye before she left. She promised to share his dream with us in America and to ask us and our churches to pray for him and this community, which seems to have forgotten God.

Wouldn’t it be wonderful if the readers of this blog would, through their prayers, help to ignite a spiritual reawakening among the descendants of those the stalwart immigrants left behind in Norway?
Posted by Joan Husby at 9:32 PM