A Norwegian in America 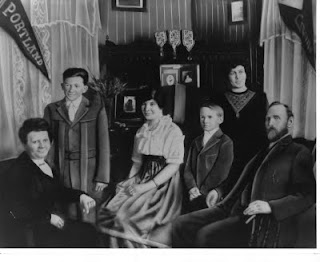 The Jon Andersson Husby family, c. 1915
l. to r., Ingebord, Ingwald, Anna, Hendrick Sr. (Hank's father), Ida, Jon Husby
In the 1880s, many young men left Norway to seek better prospects in America. They brought strong muscles, their skills at logging, fishing, or farming, their faith...and not much else. Jon (John) Andersson Husby was one of them. When he arrived in Michigan in 1882, he was 19 or 20. He went to work on a farm, as he’d done in the old country, but summer’s heat was more than he could stand. Decades later, his eyes twinkled as he told his grandson—my husband Hank—that Michigan was so hot he could hear the corn popping in the fields at night. The farmhands were served salt pork three times a day. It jiggled unappetizingly on the plate.

He acquired a stump ranch at Parker’s Landing on the Columbia River, halfway between the future towns of Washougal and Camas. He built a rough board shack to live in. There were no bridges across the Columbia, but steamboats stopped at the landing to take on loads of milk and produce bound for Portland on the Oregon side of the river. Rafts of logs floated down the river, as well as barges of grain from eastern Washington. In the summers, John and his friend Ole Reinseth hired out to logging companies to cut virgin timber. Family stories relate how they walked many miles north to the Puget Sound country for lumber camp jobs. When not logging, John worked to dig out the stumps dotting his property (hence the name stump ranch). He cleared enough space to pasture a cow and raise a garden.

In 1890, he sent for Ingeborg Reinseth, the sister of his partner Ole, who had found work as a chambermaid in England. We know nothing about their courtship, but Ingeborg came to America and married John. Their four children were born in the house John had built. By now he worked at logging sites closer to home. He also planted a prune orchard. Dried prunes were in great demand in Germany in the early 1900s. They could be shipped long distances without refrigeration and could be baked into breads and cakes as well as eaten dried or stewed. Washougal and Camas became known for their numerous prune orchards, as well as peach, pear, and apple orchards, although World War II spelled the doom of the German prune market.

In about 1890, Ole Reinseth donated land for a Lutheran Church near the Washougal River, and he and John Husby helped to build it.

The pulp mill at Camas became the largest employer in Clark County, and John’s sons and a son-in-law, as well as his grandsons, made their living at the mill.

Hank loved his Grandpa John Andersson Husby and shares his traits of humor, hard work, and strong faith. The last time Hank saw his grandfather was in 1956, shortly before he died. A visiting pastor came into his nursing home room and asked John about his relationship with Christ. John’s weak voice suddenly steadied. The words rang out as he recited the Apostle’s Creed:

“I believe in God, the Father Almighty,
the Maker of heaven and earth,
and in Jesus Christ, His only Son, our Lord...”
A half-century later, tears still run down Hank’s cheeks as he recalls the firm testimony of faith that had guided Jon Andersson Husby to leave his homeland and launch out into an uncertain future.
Posted by Joan Husby at 8:50 PM