A number of years ago, wind felled a patch of trees on both sides of the Mountain Loop Highway, near Big Four Mountain. As years went by, their bleaching trunks lay pointing west, as if pushed over by a mighty hand. Each time we passed them, I wondered why so many had fallen simultaneously in one small area. It looked as if a powerful but short-lived wind had blasted through, toppling everything in its path.

As I found out, that's exactly what happened. In a microburst a bubble of cold air drops rapidly from the clouds and bursts like a water balloon when it hits the ground, sending winds at speeds of up to 100 mph or more racing outward from the center. In dry climates, the storm might be invisible except for the dust kicked up as the winds shoot out from the point of impact. In more humid climates, it may be accompanied by thunder and rain.

Until Edith mentioned microbursts, I had no idea that the trees near Big Four had been destroyed by such a storm. And yet, microbursts are relatively frequent, occurring ten times more frequently than tornadoes.

Any strong winds descending from showers or thunderstorms are called downbursts. A microburst is a downburst covering an area of 2 1/2 miles or less in diameter. If the storm is larger it's called a macroburst. Microbursts' small size and short duration make them hard to predict. That's why I call them sneaky.

You can differentiate a downburst's damage from that caused by a tornado. In a tornado, winds spiral upward into the storm, leaving a swirling pattern of damage. In a microburst, the wind blasts downward, then outward. The pattern of damage lies in straight lines, which is why they are called straight-line winds.

In 2007, a macroburst with straight-line winds of 120 mph felled long swaths of timber along Highway 101 near Grays Harbor on the Washington coast. We drove through that area the following spring, and saw hundreds of acres littered with trees like toothpicks spilled from their container. This spring, in 2016, a new forest had sprung up. Only the broken stumps of the older forest poked through. 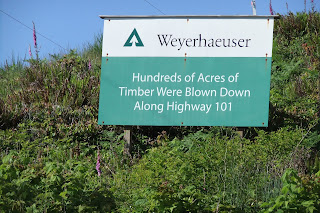 Microbursts are particularly dangerous for aircraft since the storms' small size make them difficult for pilots to detect. Wind shear, a radical shift in wind speed and direction that occurs over a very short distance, has been perhaps the biggest cause of weather-related plane crashes.

The following graphic, from the National Oceanic and Atmospheric Administration (NOAA)
illustrates what happens when a pilot unwittingly flies into the wind shear inside a downburst. As the plane encounters the winds rolling outward andupward, the plane is briefly lifted up by increasing airflow over the wings. Then the sudden shift of wind speed and direction slows and drops the plane.
Before the pilot can adequately increase airspeed, the plane collides with the ground.


Our friend Dave Penz, former director of the Kako Retreat Center in western Alaska, had a frightening experience one day on the Center's airstrip, within a few hundred feet of his own front door. Following the annual retreat for bush village educators, he took off with three teachers aboard. They were barely aloft when a microburst hit them. The plane lifted momentarily as the front of the air current rolled under them, but as they flew into the tail wind, the plane plummeted into the evergreens lining the airstrip. One tree sheared off a wing and the tail. The rest of the plane caught on the next tree and slid to the ground, landing upright on all three wheels. Except for bumps and bruises, no one was hurt.

There have been no downburst-caused commercial plane crashes in the decades since improved weather detection systems have been installed at major airports and on commercial planes. But downbursts, whether micro- or macro-, are sneaky and dangerous. They are nothing to fool with.


photo credit: Trees blown down by a burst 1 via photopin (license)
Posted by Joan Husby at 5:51 PM