A Day on Orcas Island

If this autumn is like others here in the Pacific Northwest, we may still have some balmy Indian summer days in the offing. Time for an excursion into the unique and beautiful geography of Washington state. How about a drive to Anacortes and then a ferry trip  to one of the San Juan Islands? You don't even have to wait for a sunny day to have an adventure. Our Arizona kids loved our recent drizzly ride to Orcas Island, especially when the sun peeked through to give us some spectacular views.

You can call or look up the Washington State ferry system online to find out about ferry schedules. We arrived about an hour ahead of time to assure our place in line and to enjoy the scenery while waiting for our boat to come in. Lenora and Steve disappeared over the edge of the parking lot to explore the beach below. 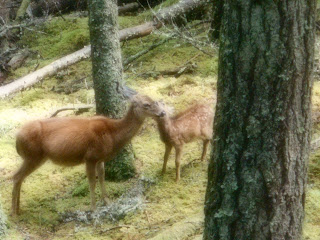 Mt. Constitution, the highest point in the San Juans at 2, 407 feet elevation, is the centerpiece of Moran State Park. We missed the views from the summit because the twisting road was closed half way up, perhaps because of a recent windstorm. But the trail to Little Summit was right there at the turn-around, so we wandered up the hill. Lenora and Steve came upon this miniature deer and her fawn. The little deer are everywhere. We were told they are small because they are confined to the island; hence inbreeding has caused succeeding generations to become smaller and smaller.

These two young bucks are about as big as medium-sized goats, and with their albino pigmentation that's what we first thought they were. Albinism is another common genetic characteristic among the San Juan deer. 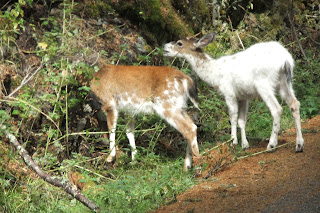 Geologists tell us that the San Juans are much older than the mainland. They are actually part of a small chunk of a continent which no longer exists. It collided with the mainland millions of years ago. As the oceanic plate which carries them crushes against and under the continental plate, the islands are being slowly refolded upward. During the ice ages, the islands were covered with more than five thousand vertical feet of ice, which further carved and shaped the beautiful views.


The fun of a trip is often in the details. We noticed a number of brown hillocks alongside the road, two or three feet tall and somewhat bigger than that at the base. We inspected one closely. The surface was moving! Each hillock is the home of thousands of red-headed, black bodied wood ants, many of them laboriously hauling twigs and evergreen needles bigger than they are to add to the mass of the anthill. Below the surface, the queen  lays eggs, nurse workers tend to her and the baby ants, and housekeeping ants haul dead comrades and other debris out of the nest. Watching carefully, we saw ants marching like soldiers along invisible trails into the woods, some carrying household debris. Others were returning with bits of leaves and other building materials.

Although our day on Orcas Island was partly cloudy, we didn't experience the steady rain that was happening on the mainland. That's because the San Juans lie within the rain shadow of the Olympic Mountains. That makes them part of Washington's "banana belt", giving them only about half of the annual rainfall of Seattle.

We drove from one end of the horseshoe-shaped island to the other, ending at tiny Olga, with its popular restaurant-art gallery and its picturesque post office, and never ran out of lovely vistas.

While waiting for the ferry back at Orcas Village, we enjoyed coffee drinks at the 1904 Orcas Hotel and explored a couple of souvenier shops. Next time we'll stay overnight so we can enjoy more of this charming place.