For each of the thirteen years of our marriage, we’ve spent our anniversary exploring some part of this beautiful northwestern corner of the United States. We’ve stayed on the Olympic Peninsula, ferried to Victoria B.C., and one time drove only five miles away to a local Bed & Breakfast.

This year we took one of our favorite drives, the Cascade Loop, crossing Stevens Pass, driving north along the Columbia River, and home via the North Cascades highway. On the way we spent the night at Washington’s own Bavarian village, the little town of Leavenworth.

Where Icicle Creek and the Wenatchee River come together, several tribes had long fished for salmon. The first white settlers established a trading post there. In 1893, the Great Northern Railway came through Tumwater Canyon. The town was platted that same year by Captain Charles F. Leavenworth, for whom it was named. With the coming of the railroad, timber companies' logging flourished along the nearby hills and valleys. People poured into the thriving town.

Then, following the great Wellington avalanche disaster, the railroad changed its route, bypassing Leavenworth in favor of the less dangerous present route. The timber companies along Icicle Creek went out of business, many townspeople left, and by the 1960s, the town had nearly gone extinct.

Town leaders came up with a plan to base the town’s economy on tourism. They would transform the frontier town of Leavenworth into a Bavarian village. The setting already greatly resembled the Bavarian Alps. With the addition of a series of annual festivals to bring in a million tourists a year, Leavenworth quickly became a popular tourist destination.

We didn’t need a luxury hotel or souvenirs so we skipped the fascinating stores, except for a cozy little bakery-coffee shop with a porch. We ate delicious pastries while gazing past the building tops to the nearby mountains.

After exploring Icicle Canyon, we drove through town, looking for a place out of the ordinary but inexpensive where we could spend the night. We crossed the Wenatchee River and found ourselves on our way to Peshastin, so turned around and headed back. As we again approached the bridge, we spied a sign nearly hidden in the trees. It read “Bindlestiff’s Cabins.” A narrow road led into the canyon.

“Turn here,” I suggested, my serendipity meter pinging like mad. A row of tree-shaded, one-room cabins lined the edge of the bluff, each with its own railed deck overhanging the river below.  The rushing river drowned out any sounds of civilization. The water tumbled past, powerful, foaming, swirling. No rafters braved its rapids while we watched, but the river itself provided hypnotic entertainment.

Our cabin had the necessities: cleanliness, an adequate bed, kitchenette with fridge and microwave, a shower. We didn’t turn on the television. Instead we watched swallows dipping after insects just above the water’s surface. 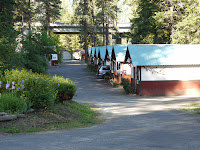 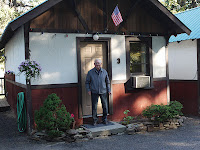 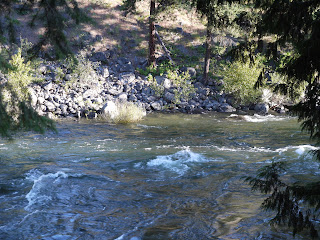 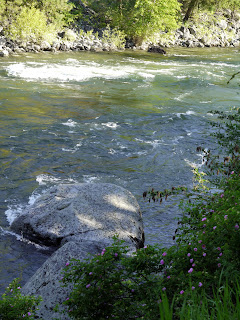 Next morning we watched the sun strike through the trees to the green water below while we ate our breakfast of coffee, fruit, and white-chocolate raspberry scones from the bakery.

Soon we were off on the next leg of our trip, up the Columbia River, then west over the North Cascades Highway and home.