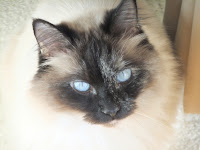 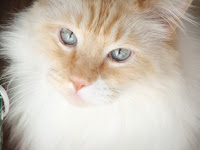 We'd been married almost three years when we spent a weekend with our Central Oregon niece and her husband. On their front porch Mama Cat had a family of seven lively kittens, some white, some with orange stripes, and a couple with black faces and stockings. All of them needed homes.

I've never been able to resist kittens, and I probably played with them too much, because while we were inside eating dinner, their mother carried them one by one off to a hiding place. However, she overlooked a little gray female with a black velvet face. That evening, the tiny cat followed me around the house and cuddled against my neck.

Next morning, I happened to look out the window in time to see Mama Cat slipping up the hillside behind the house. She disappeared beneath a brushpile. Ah ha! When she left to go hunting again, Tami reached underneath the brush and drew out five kittens. She returned them to the front porch nest. But where was kitten number six?

I worried about the missing baby all day. At dusk, we saw a fuzzy white mite balanced on a branch atop the brush pile, wailing at the top of his lungs. I'd already lost my heart to his playful gray sister. Both Hank and I fell in love with the independent little male as well.


We went home, the two kittens riding in my lap. We hadn't gone far before we christened the bouncy white kitten with the orange ears and nose Popcorn. He soon outgrew his sister, making her name Peanut even more appropriate.

That was ten years ago this May. They were five weeks old when we brought them home, so we celebrate their birthday the second week in April. It's been ten years of entertainment and companionship. Thank you, Popcorn and Peanut!