The Snow Geese are Back!

Recently, a morning fog mass crept across Skagit Bay and the farms on the delta below us. For a few moments the bank’s leading edge paused at the northern reach of Port Susan and the mouth of the Stillaguamish River. We watched the fog swallow the farms along the shore and blot out Camano Island. Soon it swirled into the treetops on our hillside.

When we stepped outside, we heard disembodied voices gabbling in the fog. The Lesser Snow Geese were back!

Later, we drove to the Rexville store on Fir Island, one of our favorite places for lunch, passing a large flock of snow geese grazing in a field. While we waited for our order, Rexville’s proprietor told us he’d recently talked with a Russian ornithologist who studies the birds at their nesting grounds on Wrangell Island, not the Wrangell Island in Alaska’s panhandle, but the Russian island in the Arctic Ocean north of Siberia. He passed on some interesting facts he’d learned from the visiting scientist.

Some of the Wrangell Island geese winter in California. The rest winter locally and would show up soon. The Lesser Snow Geese we’d seen, the proprietor informed us, would not stay. They would feed and rest for a while, then fly on.

Snow geese usually mate for life and can live from 10 to 20 years in the wild. They raise three or four young every year. During the summer, they molt and can’t fly. The Russian expert described how most of the geese prefer the tundra at one end of the island for their nesting sites, though quite a few nest at the other end. When the goslings get strong enough, the whole of the smaller group (thousands of parents and young) set out walking to join the geese at the other end of the island, at least 40 miles away, even struggling across a rugged mountain range. On the way, many lose their lives to Arctic foxes and other predators but the flock keeps going.

The snow geese who winter here in the deltas of the Stillaguamish and Skagit Rivers are part of the Fraser-Skagit population, and move back and forth between the estuaries of the Skagit and Fraser Rivers. A sanctuary has been established in the center of the Fraser estuary for the compact white birds with the black wing tips and pink bills and feet.  About half of the wintering geese can be seen swirling over the farm fields and intertidal marshes of the sanctuary from mid-October to mid-December, and again from mid-March to mid-April. The other half fly on to the Skagit Delta, where they will be joined by the rest of the flock from mid-December to mid-March.

In January, 2010, the two flocks totaled 75,500 birds. Researchers estimated that forty percent that year were young birds, identified by their grayer plumage. The following January, there were only about 65,000 birds with very few young. The nesting season in Siberia had been poor.

Snow geese feed on the intertidal marsh plants of the estuaries, such as bulrush and sedges, using their strong bills to dig up roots and rhizomes. Visitors will notice the head feathers of geese who have been uprooting marsh plants have been stained orange by the iron-rich soil.

In the fall, farmers plant grass cover, not only for soil enrichment, but for the geese and other wildlife. The geese will also eat any unharvested crops, including leftover potatoes in the field. One of the Northwest’s most spectacular sights is a large, dense flock of snow geese marching across level farm fields in close formation, feeding as they go. If a bald eagle (or dog, or person) comes too close, the geese will take flight, then swirl down in another location like a storm of noisy snowflakes.

Scientists working on Wrangell Island have banded some birds with colored neck collars and fitted others with radio transmitters to aid in population and migration studies. If you come to watch our winter visitors and notice any marked birds, you can assist the ongoing international research projects by reporting your observations to The British Columbia Waterfowl Society, 5191 Robertson Road, Delta, BC V4K 3N2. Phone: 604-946-6980 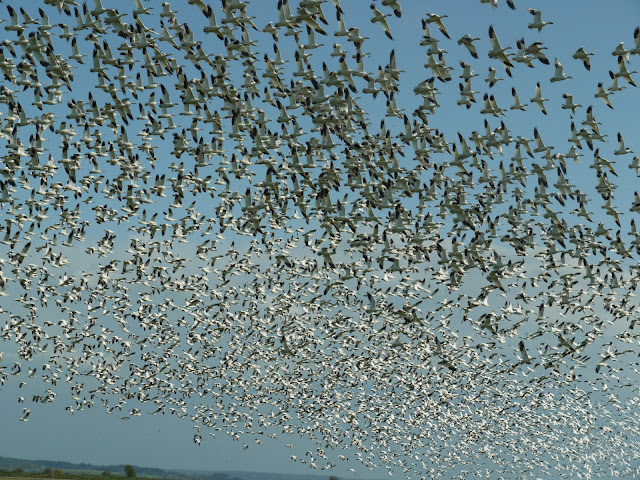