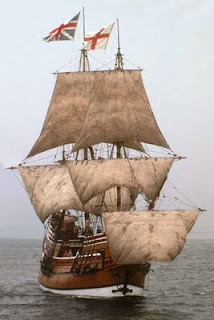 Along with most families in America, ours can tell stories of journeys, bits and pieces of history that help us understand how we got where we are today. We share  our own New-World beginnings with many people who trace their ancestries back to the courageous settlers who came to America on the Mayflower.

When Priscilla Mullins boarded the Mayflower in 1620, she was 17 years old. It was already September, and for two months the passengers endured stale air and discomfort in makeshift quarters between decks as the ship tossed in stormy seas. In one storm, a main beam cracked and the ship began to leak, but the beam was repaired with an iron spike brought from the Netherlands. They pounded caulking into the cracks. When the ship was blown off course, it landed on the rocky shores of Massachusetts, far from their intended destination in Virginia. Priscilla’s parents and brother died during that first terrible winter in the New World, leaving her the only survivor of her family in America.

Captain Miles Standish, the newly widowed military advisor of the colony, wished to marry her. He sent his friend John Alden to plead his cause. John, not one of the fifty members of the Pilgrim band, was a ship-carpenter by trade. He'd been hired as a cooper, or barrel maker, for the Mayflower, which usually docked at Southhampton, England. Either because of a desire for adventure, or because he already had his eye on Priscilla, he came along on the voyage and became one of the founders of the colony and the seventh signer of the Mayflower Compact. According to a famous poem by descendant Henry Wadsworth Longfellow, when he tendered Captain Standish’s proposal of marriage to Priscilla, she replied, “Why don’t you speak for yourself, John?”

So he spoke for himself, Priscilla said yes, and they became the parents of ten children who survived to adulthood. Of all the pilgrim families, they have the most descendants.

Our branch of the Rawlins family traces its ancestry to John and Priscilla Alden through their second child. Elizabeth, born in Plymouth in 1625, was the first white girl born in New England. 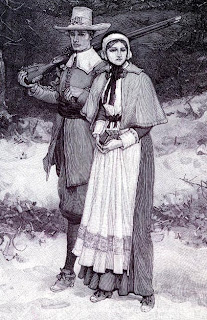 Elizabeth was described by someone who knew her as “dignified, a woman of great character and fine presence, very tall and handsome.” In 1644, she married William Pabodie in Duxbury, Massachusetts, and became the mother of thirteen living children. William, who held the office of town clerk after fire had destroyed the town's records, carefully recorded his own marriage and the births and marriages of his children.

I can’t help but wonder how she remembered all those names!