Even way up north at Lac la Biche, where we were camping with our Canadian cousins, there are fishing restrictions. The northern pike have to be at least 30 inches long, and each licensed fisherman could take only one home, although we could catch and eat some as well during our stay. On his first trip out, Hank was thrilled to catch a 36-inch pike, as I mentioned in the last post.

That day, there’d been a hatch of billions of midges–half-inch soft-bodied insects that cruise through the air hunchbacked with tails tucked up in front of them. At first, Hank was horrified to find himself surrounded. He didn’t know this kind didn’t bite. They were as thick over the water as brown smoke. The fishermen had to keep their mouths shut to keep from swallowing them.

I learned from Wikipedia that there are several kinds of midges, from the small no-see-ums with outsized bites to large crane flies whose larvae feed on grass roots in lawns. You can tell midges from mosquitoes by their habit of resting flat on a surface rather than standing up on the tips of their legs. Their legs are so brittle that they break off easily.

The females of the midges we saw lay egg masses over open water or attach the eggs to vegetation. The larvae drop to the bottom, where they scavenge on organic debris. Some overwinter in the larval stage. Then they pupate for about 48 hours before they emerge from the pupal skin and rise to the water’s surface. The adults do not eat. Their life span is only five to ten days. However, midges in populated areas can cause havoc just by their sheer numbers. They swarm around lights and on screen doors. They stain outside surfaces of buildings and find their way into houses.

But they are also an important item of food for many freshwater fish and other aquatic animals. As we saw firsthand, they provide a banquet for the birds that live around Lac la Biche as well.

By the time I went out in the boat next morning, the life cycle was over for many of them. They were falling into the lake where they floated, matted together with other dead midges. They washed up in thick windrows along the shore.

In the evening Cousin Allen Shaw took his nineteen-year-old daughter Katrina, her boyfriend Aaron, and me down the river to the lake to try for sunset photographs. We were almost too late, though pinks and mauves lingered in the water. Alan turned off the engine and told us to listen. We heard a high-pitched humming from the direction of the cattail marshes along the river–the love-songs of billions of midges. Clouds of birds whirled above the cattails.

Then small, black-headed Franklin’s gulls began to swoop near the surface where we rocked in our boat. Soon we were in the middle of a veritable ballet...hundreds of birds diving and looping through the quiet air, so intent on their feeding they were almost completely silent.  The dance of the gulls followed us all the way up the river to camp, even though the light had nearly gone. By the next morning, few of the midges remained. Those who’d escaped the birds had mated and laid eggs for the next generation. Now they’d die and sink to the bottom of the lake and the river to provide nutrition for other creatures. 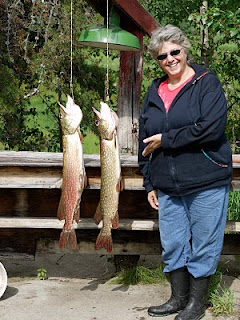 Top of the food chain: Cousin Vicki with northern pike
Posted by Joan Husby at 5:15 PM