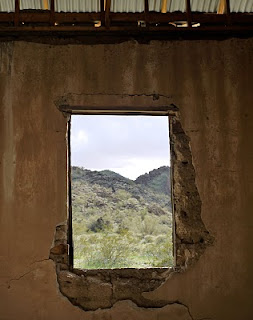 Swansea, AZ from a miner's window

Ghost towns have fascinated me since childhood. Several such places were located near our home in Washington’s Cascade Mountains. The neighborhood kids often walked to old Robe, the location of a former mill town at the mouth of the Stillaguamish River canyon. Silverton and Monte Cristo, farther up the valley, had been mining towns. All three communities sprang into being in the late 1800s. When residents left, our burgeoning plant life and rainy weather rapidly returned the communities’ remnants to the forest. Reminders of Robe and Monte Cristo are hard to find now, but summer residents and others who live there year-round have kept Silverton from disappearing.

So this spring, when we visited cousins Darlene and Vernon Edinger in Bouse, Arizona and they asked if we’d like to visit the ghost town of Swansea, we said an enthusiastic “yes.”

Early builders in the desert often used dried adobe mud bricks for their homes. Though only cactus and spiky desert shrubs flourish in that land of little rain, doing little to hide evidence of civilization, infrequent downpours eventually dissolve the adobe buildings. Only stubs of mud walls are left. As in ghost towns everywhere, vandalism also hastens the disappearance of remains. 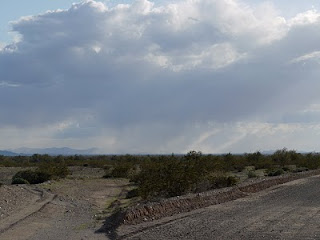 Even so, we were eager to explore the site. We packed a lunch, grabbed our wide-brimmed hats and set out in the Edinger’s four-wheel-drive pickup. We were scarcely out of town before the paving turned to dirt. Desert roads in Arizona are easy to build. Scrape away the sparse vegetation to a depth of six or eight inches, following the lay of the land. Presto! That’s about all there is to it.

Where the road dips into low spots, signs read “Do not enter when flooded.” Often someone ignores a sign and suffers the consequences. The Edingers, who spend two months of every winter in an RV park in Bouse, saw for themselves how quickly trouble can strike this winter. News reports had told of heavy rain far to the north. That night, Darlene woke to a strange rushing sound. No wind or rain beat against their RV. She got up to peer out the window. The deep, usually dry wash behind them was running bank full of roiling water. By morning the wild stream had drained away into the Colorado River. Fortunately no one was in the channel when the flash flood came crashing through.

As we headed northeast out of Bouse, a few cloud puffs sailed across the sky. We crossed a strait-jacketed river flowing direct as an arrow in its concrete channel. A sign credited the canal’s existence to the Central Arizona Project, which brings water from the dammed-up Salt River to the thirsty conglomerate of cities making up the greater Phoenix area.

Ruins of the smelter from a slag heap 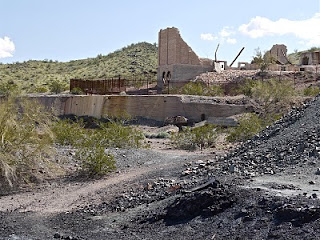 We had the gravel road to ourselves. After 25 to 30 miles, we reached the mountains cupping the once-busy townsite of Swansea (swanzee). As we wound up, then down, the road became narrower and more jarring. Finally, we glimpsed the town’s ruins ahead. 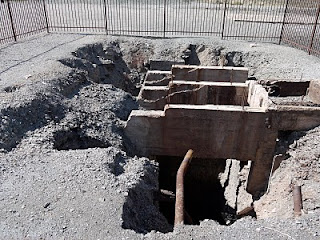 Remains of a shaft

The Bureau of Land Management is attempting to protect the remnants. It has built an area with parking for a few cars, an interpretive sign, and restrooms. It has established an interpretive trail and installed protective roofs over a double row of crumbling miners’ quarters. Metal fences keep visitors away from vertical shafts, one of them 1,200 feet deep.

When mining began in this area in 1862, copper ore was shipped via San Francisco to smelters at Swansea, Wales. Later, George Mitchell, an  entrepreneur from Swansea, invested in rejuvenating the mines and named the site after his hometown. He built his own furnace to reduce the ore, installed hoists for five mine shafts, and constructed a pipeline to carry river water to the townsite. He built a smelter in 1908. An electric plant, water works, restaurants, movie houses, saloons, a railroad, even a newspaper served the 500 or so people who lived there. Until the 1920s, the town hosted a general store, a hospital, and a post office.

However, Mitchell spent too much money on building the plant and not enough on working the mines. His company went bankrupt.  Swansea as a community lasted only twenty-nine years. 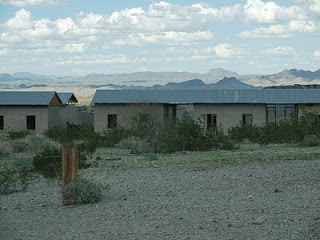 Today, all that remains of the town is the double row of miners’ quarters, the foundations of the reverberatory furnace, the crumbling bricks of the smelter, and a few remnants of adobe walls. And, oh yes, the heaps of waste rock brought up from inside the mountain and the slag piles left from smelting the ore. 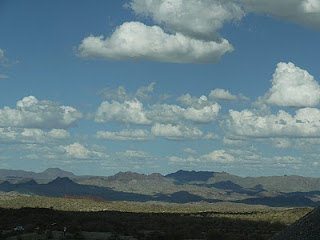 We sheltered from the wind against the side of the Edinger’s truck while eating our picnic lunch, then we wandered around the ruins. I tried to imagine living and working there in the broiling summer heat; the noise of the machinery, the squeal of the hoists, the belching furnace. A few other tourists poked around in the distance. Otherwise, the only living creatures were a few well-camouflaged lizards that darted from underfoot, startling us and reminding us to keep an eye out for snakes. The wind brought a growing armada of clouds to cast shadows across the hills below us.

As we turned back to Bouse, curtains of rain swept the faraway mountains. Eventually, the storm might reach our part of the desert and fill some of those sandy washes with rushing water, but for now the sun shone brightly. As we descended to flatter land, we peered hard into the rocky defiles. We almost expected to see ghosts of prospectors with their faithful donkeys, still searching for the next strikes.


Even in springtime, the desert mountains are rugged. 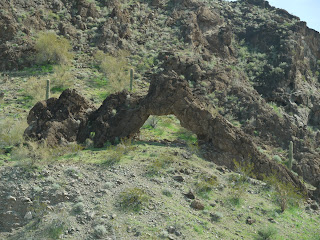