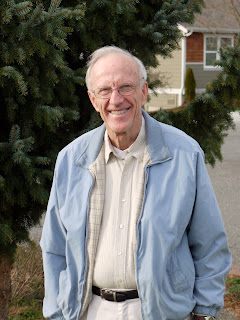 Sun Breaks guest blogger Dr. Jerry Rusher of Camano Island, WA, mentioned in his entry of Jan. 12 that he and his wife, Wanda, had frequently spent time in Haiti volunteering their skills to help the sick and injured. After Wanda passed away last year, he returned to the Free Methodist Hospital in Dessalines, about 90 miles from Port au Prince, to check on friends and patients there and to help where he could.

He was preparing once again to leave for Haiti on Sunday, January 17, when word came of the catastrophic earthquake of January 12. By now everybody has heard of the horrendous difficulties in getting help to those suffering in the aftermath. On the 12th, Dr. Rusher knew that his plans also lay in ruins. He’d heard by cell phone that the new, four-story-building he would have stayed in upon his arrival at Port au Prince had collapsed. Two days previously, the building had housed 70 national pastors for a Free Methodist conference...the entire denominational leadership for that country. They’d gone home, but Katy Zook, a young volunteer from the nearby town of Arlington, WA, was trapped in the rubble. She survived, but others he knew did not. Planes were having trouble getting in and out of the damaged airport. The seaport too was wrecked, and roads were blocked.

The horrified world looked on, wanting to help. Dr. Rusher could think of nothing else but how to get back to Haiti. He found that the hospital at Dessalines had stood, and despite its distance from Port au Prince, it was filling up with gravely injured people now suffering from gangrene and other infections. The Haitian and missionary doctors and nurses there were under stress because of the huge workload. After talking with denominational leaders in this country, Dr. Rusher was asked to head a team of nine medical volunteers, including a couple from Canada and some from New York. One of the team, Dr. Gary, a Haitian, is an expert in infectious diseases. His knowledge will be of great value to his colleagues.

Plans now are for the team to leave on Saturday, Jan. 23, to fly to Santiago in the Dominican Republic. After a four hour bus ride, they will be met at the border by a driver from the hospital (if he is able to get fuel). The hospital has always used diesel fuel to power generators for use during surgeries and at night, since electricity is turned off at night and is erratic during the day in the best of times. The hospital still has diesel in its storage tank, but gasoline is in short supply.

The team would appreciate the prayers of God’s people for the Haitians and all those who are trying to help them.

Note: There are many reputable organizations handling donations for earthquake victims, but if you are interested in helping Dr. Rusher directly, you may send a check to